Yeah, it’s a bit like bushwhacking in my garden at the moment. The Husband finally did the lawns yesterday, so we are no longer the scourge of the neighbourhood. I didn’t get to finish my work in the vege garden last weekend, so various vege plants were still trying to take over the world. The potatoes were the worst offenders and their pumpkin, tomato and kale sidekicks were being pretty naughty too. The potato tops were totally covering all the walking planks around them. I’m not sure if you’re supposed to trim potato tops, but I did. They left me with no choice. I only cut back the bits that were in the way. Why do I feel like this might be one of those frowned-upon things? Poor potatoes. Yeah, nah. The potato tops are humongous, so I don’t think they need any pity. Maybe I’ll try to contain them with string and stakes henceforth. That didn’t occur to me in the midst of my bushwhacking. In any case, the vege garden looks significantly more tidy now.

Before trimming the potato tops…

The same view after trimming and weeding.

Some of the tomato plants escaped de-lateraling last weekend, but I soon got them sorted out. For those who don’t know much about laterals, here’s a crash course. In simple terms, a lateral is a shoot that grows in the angle between the main stem and every leaf stem. Laterals start off as tiny leafy bits, but if left to their own devices, they grow into large stems, producing their own leaves, laterals and fruit. It’s preferable to snap off the laterals before they get too big, so the plant can focus its energy on producing large fruit rather than excessive green growth. However, this year I’m trying out letting each plant have three main stems: the original main stem and two laterals grown from the base of the plant. This is supposed to bring greater production. Although, technically, I now have three times as many laterals to remove as the plants grow. 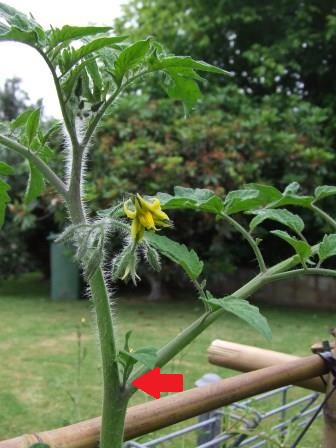 There are a couple of side notes about laterals. I’m talking about indeterminate tomatoes here, which keep growing. Determinate or bush tomatoes stop growing upwards once they reach a certain height, so you probably want to keep some laterals to get more fruit. It should say on the seed packet or plant label if they’re determinate. I’m not a big fan of determinate tomatoes. I like my plants to get towards 2m tall. The other tricky bit is when the main stem splits into siamese twin heads at the top. If you leave the de-lateraling for a little long, you’ll often end up with two heads running away on you. Then you have to choose which one to keep, which should be the most vigorous one or the one that’s most convenient for tying. When laterals have gotten too hungus, it’s best to cut them off rather than snap them.

Last but not least, I finally planted the basil that I grew from seed. I have the common Sweet Genovese basil as well as Spicy Globe, which I haven’t tried before. It’s supposed to have a more authentic, strong flavour. Sounds like a good addition to our homemade pizzas. Yum!