I am now, once again, a Hamiltonian. Or, as I prefer, a Tronite. We moved to Hamilton one month ago: myself, The Husband and our sole-surviving cat, Nala. Ninja disappeared two weeks before we left, which made the already stressful move even harder. I will never know what happened to him, but after finding his collar under a small bush in the garden by the footpath, on the same day as we also had a swarm of bees in the front yard, I assumed that one awful fate or another had befallen him. But I like to think of it like an Enoch situation, in which Ninja was walking in the garden and then he was not, for God took him (see Genesis 5:24). Here are the last photos I took of Ninja in my garden. 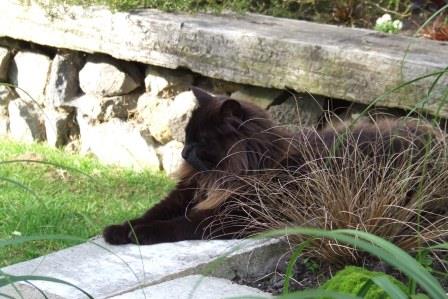 We are staying with my parents at present; Nala, The Husband and I. Then there are the masses of plants I brought with me, mostly two of each kind, which is also amusingly biblical. What a pity I didn’t have an ark, otherwise I could have brought a whole lot more. The photo below shows about half of the plants that came with me. As it was, we couldn’t quite fit everything in the truck or in the car, so I had to part ways with my Royal Gala apple tree, my bay leaf tree and a few other plants in somewhat sentimental pots.

Now I am a garden nomad. I have been doing rather a lot of gardening in my parents’ garden, which partially quells my itching green fingers, but it’s not the same as having a garden of my own. I am also missing my plant propagating and growing, although I should probably ban myself from those sorts of activities for the meantime.

On the bright side, I have had time to formulate a Fruit Plan. After much research and agonising over varieties, I have a list of fruiting plants and trees that I want to acquire in the future. The expected outcomes of this will be to have some fruit all year round, albeit on a small garden scale; minimising our supermarket spending and maximising tasty, fresh, home-grown produce; and to have a good selection of fruit that we can use in baking and cooking. Not surprisingly, the fruit plan has already begun.

Those that made it up from Christchurch were my ‘Golden Queen’ peach tree in its large planter and three young ‘Ben Ard’ blackcurrant plants, which I had propagated from prunings. After one week in Hamilton I had acquired a rhubarb called ‘Moulin Rouge’, which I expect to be the kind of dark red-stemmed variety I have been hankering for, a Tahitian lime and a ‘Yen Ben’ lemon tree. Then came some Christmas money and, subsequently, a ‘Granny Smith’ apple tree on a dwarf rootstock and a small bay leaf tree to replace my left-behind one. Now it is time, says The Husband, for the Fruit Plan to have a little rest. Until we get our own place…