The past week has been “Welcome to the inpatient ward.” And worse. The Little Fulla came down with a cold. He has only had one cold before this when he was quite young. The first two nights he kept me up more often than not and was very needy during the day time. I would of thought a sick child would sleep more than usual during the day, especially when he had slept so poorly during the night but noooo. Sleep? What is sleep?

As if looking after a sick human child wasn’t enough, I also got lumped with a sick feather child. Gimli, one of the barred rock pullets, became lethargic, lying down often in the orchard. I looked her over and couldn’t notice any other symptoms so I brought her inside in a cat cage to watch her and let her rest. She wasn’t eating or drinking much and I was starting to get really nervous. I googled my heart out trying to figure out what was wrong. Lethargy is like a token symptom of almost everything. I didn’t want to douse her with random treatments as that could do more harm than good. This was bad timing. Aside from running around after my sick child, I was supposed to be receiving and rehoming a rooster from friends the next evening. After some thought and seeking advice from the lady I brought them from, I treated Gimli’s water with Coxiprol for coccidiosis. This was my best guess. She could have had a resurgence of coccidiosis after the initial infection and treatment. The inpatient ward in the lounge now had a sick human child, a sick feather child and a mum with a very sore back; I had twinged my old back injury.

After having a bunch of food and water Gimli perked up a bit. The next morning she was standing, walking and talking to herself. I put her back out with the others as I had to treat their water with Coxiprol to be safe anyway and she seemed better than before. Yes, that’s right, I had just integrated my two pairs of chickens into one flock, which I had been feeling quite pleased about. The process involved some chasing and glaring but nothing too aggressive. Phew! I had let the pullets roam around the big pen for a few days, keeping a gap in the fence to their smaller pen so they could come and go. The biggies soon figured out how to come and go to the littlies’ feeder. Snacks! After a few days I took the fence down. Next, I hung the pullets’ feeder beside the others’ in the run and showed them how to get to it and the water bell. That evening, Legolas and Gimli were waiting outside the door of their closed house so I herded/guided/pushed them to the main hen house, where Sam and Frodo were already settled, so they would know the way, and put them inside. And that was that.

Back to the story. I went outside to check on Gimli as much as I could during the day while looking after my sick, needy baby. She was still lethargic but getting around more than before and enjoying the company of her pal Legolas, who was overjoyed to have her back. Later the next morning I was shocked to find her dead in the passageway behind the garage. Poor Legolas was hanging nearby instead of with the others. I had The Little Fulla on me in the carrier so all I could do was remove her and put her in the cage for The Husband to deal with later. I couldn’t deal with it. I was tired, downtrodden and The Little Fulla wasn’t sleeping long enough to get anything done anyway. Fortunately, the rooster’s arrival had been moved to Friday evening. Did I mention I also had an assignment due on Friday? Terrible timing!

Legolas (top) and Gimli (bottom). The last photos I have of Gimli, the day before she died, when I thought she was improving. Why do animals do that? 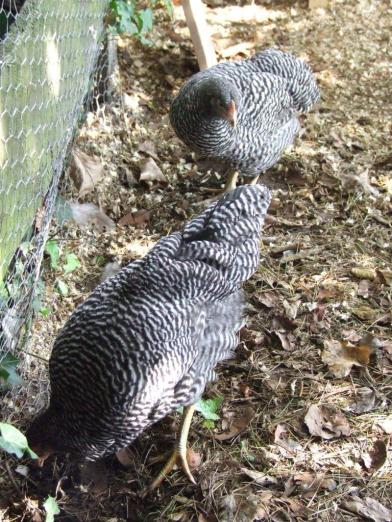 I was struggling to get my assignment done, worrying about the arrival of a new chicken when I had just had one die on me and trying to research chicken illnesses for some sense of certainty. I can say now that I’m almost certain it was coccidiosis, either a resurgence of it, or, more likely, Gimli’s body had struggled to cope with the effects of it since the initial infection, I hadn’t picked up subtle signs and her body might have been too damaged internally to cope with it. Having bloody poops when I first got her, I don’t know how long coccidiosis had been affecting her. I wasn’t even sure it was coccidiosis as I hadn’t experienced it before. Although I treated them, I hadn’t done a follow-up because of my uncertainty. As I look back, what I considered personality characteristics in Gimli; being more shy, more stand-offish, and less adventurous than Legolas, were probably actually signs that something wasn’t right. I have read that chickens are innately very good at hiding illnesses so they don’t get picked on or even cannibalised. Since she was new I had no reference by which to judge her behaviour, but all chickens should be alert and adventurous, and I should have known.

I am still feeling terrible about all this, and it is very hard to share not only my sadness, but my failings. Yet I have come to the conclusion that death is a part of life, and instead of beating myself up and thinking about what I could have done differently, I am focusing on learning from my mistakes and learning as much as I can about chickens so that I can respond to and look after them better in the future. I am continuing to treat my other chickens for coccidiosis with the full treatment, I am checking them as often as I can during the day and watching their behaviour, I am checking their poops for signs of abnormality and I have done a full clean of their house again.

When I started cleaning out the hen house I found two red mites on it. I just about flipped out. I squished them. I had never seen red mites before, but these were red and they were mites. Red mites filled me with more terror than coccidiosis. Red mites come out of the crevices at night and suck on the chickens’ blood, causing weakness and death in serious cases. I have read horror stories about people, experienced chicken people, having infestations of red mites that won’t go away and treating their coops with product after product, kerosine, anything and everything, over and over again and sometimes having to burn the whole house to destroy all the mites. So, yes, I started freaking out at the sight of red mites.

I sprayed the house hard. Insecticide dripped down the walls. My arms hurt from the stupid small spray bottle I was using in a hurry and re-filling several times, because The Little Fulla had woken up part-way through. Luckily, The Husband was there to occupy him until I had finished and I could feed him. Later on, I googled red mites as I had a funny feeling about those red mites. It turns out, they were red spider mites. Oops! Duh, of course, I have seen them in gardens before. They are a plant pest but not a chicken pest. However, I did find two little black, mitish looking things during the whole cleaning process, at least one of which may have been an actual red mite. I had the eagle eye on after everything I had been through. It’s ok, people, I don’t have a red mite infestation! Time to calm down. You can never be too careful though. Those things can take over like nobody’s business. I am going to be more strict about my full hen house cleaning schedule now too.

Now, what on earth was that about a rooster? Stay tuned for tales of a rooster…

2 thoughts on “I Have Terrible Timing With Chickens”