The feather babies are babies no more. The flock has merged into a cohesive unit and Mr Bingley is at the centre of all this. He has become a rooster. Gone is the innocent little boy; Mr Bingley has become confident, protective and erm, horny. At the 16-week mark, within the space of a few days, while Frodo was in the broody breaker, he went from being not much different from the young girls, aside from his morning crowing, to commanding the girls: leading them around the pen, warning them of danger, tid-bitting them with food and doing other things. I got a bit of a shock when I let Frodo out of the broody breaker and he immediately ran over and held her down by the neck. She got away, but moments later I saw him attempt to hold Legolas down to mate with her. That didn’t go well for him and she chased him away. But he’s definitely got the knack with anyone he can now. I wasn’t expecting him to mature so soon! What’s more, he’s already fertile too! Eggs I have cracked to scramble from both Frodo and Legolas have been fertile. 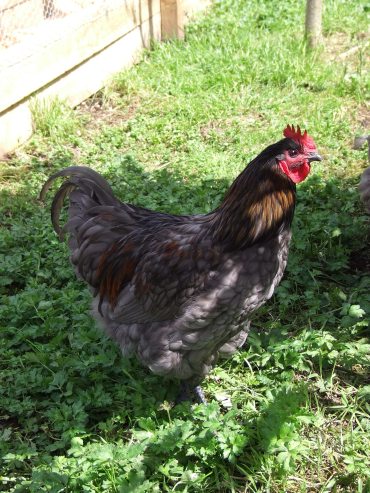 He may not be the pure Australorp I thought he was, but he’s gorgeous all the same. 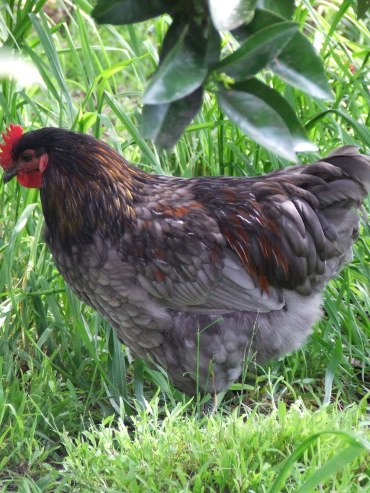 It is certainly impressive for a heavy breed to be maturing that early. Mind you, the girls are maturing quite fast too. I was feeling quite pleased with myself until I started thinking about genetics again. Oh oh, this post is about to get hijacked by more genetics investigations! Mr Bingley has too many red feathers, and more tellingly, too many shades of red to be explained away by just poor colouring in an Australorp line. I thought about his father, Elrond’s, potential parentage again. Elrond looked very Australorp-like. I’d never guess that he was only half Australorp. But I’m obviously not an expert, at all, and apparently it’s quite common for a first-cross chicken to look more like one parent. I googled the two most likely breeds that Elrond could have been crossed with according to the eggs that had been ordered by his orginal human mum, speculating that one of his parents (probably his father since that wouldn’t be obvious upon egg collection) jumped a fence and had a fling: Barnevelder and Buff Sussex. I noted with curisoity how Mr Bingley’s red hackle (neck) feathers graduate from a bright red higher up to a lighter buff at the base of his neck, with blue stripes through the middle, which looks quite pretty intermingled with the blue. The red on his wings and sickle feathers is a deep mahogany red. 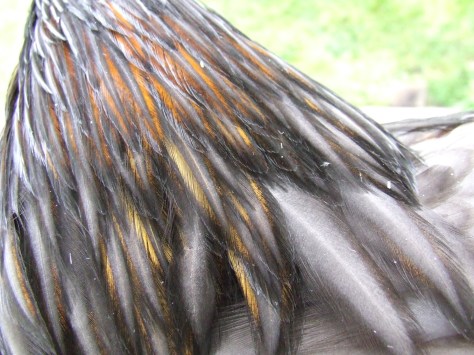 An exploration of Mr Bingley’s colouring. 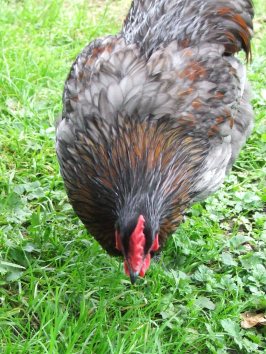 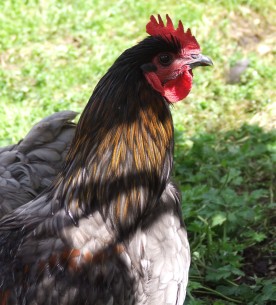 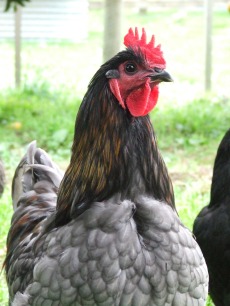 Once I started doing more research I realised that another breed in the mix could well explain the quick maturity. I wasn’t expecting Mr Bingley to mature until he was 6 months old or later. Australorp roosters can take up to 10 months to mature. His father was 6 months old when I got him and it took him a few more weeks to become fertile. Hence why my mouth dropped open when I saw Mr Bingley doing the business (and producing fertile eggs very soon after) when he was just under 4 months old. And having grown up through winter. Lets have another look at the main possibilities of Elrond’s potential mystery parent, and Mr Bingley’s potential mystery grandparent. 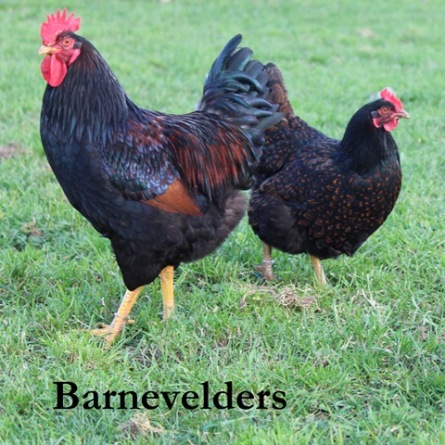 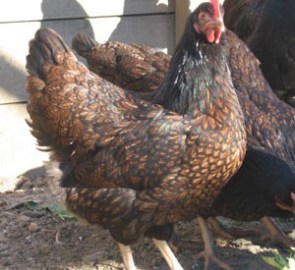 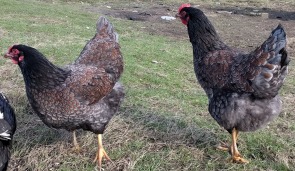 And here is something interesting: a blue double laced Barnevelder rooster. There are some colour similarities with Mr Bingley going on here. But colour itself can come up all over the place when you cross breeds and colours, and is again a different matter to individual feather patterning. Mr Bingley has no red on his flight feathers like the Barnevelders do (like a red triangle in the photos). But then again, Barnevelder rooster colouring is quite variable, so who knows? Then again, Mr Bingley’s body type isn’t particularly similar to the Barnevelder.

Then again, here is a red Sussex rooster (it is easier to focus on body type with the darker red coloured Sussex), which actually shows some similarities to Elrond’s body type. Here are a couple of purebred black Australorps as well. I think the Australorps have shorter, more forward-positioned necks/heads. Mr Bingley’s body shape looks more Australorp-like than his father’s to me. One thing’s for sure: it is VERY hard to figure out a chicken’s parentage just by looking at them! And you can never assume when it comes to chickens. I look back at the naive Twiglet who thought if a bird comes from a breeder it must be a purebred. I now know that many breeders have projects, especially since we have a smaller gene pool and a limited number of breeds in NZ. Who doesn’t love a project or ten million? Projects can involve crossing breeds to recreate breeds or colours or to improve a breed characteristic. This means there can be 1/2s, 3/4s and all sorts of other generations of varying fractions on the property. Most breeders are very careful about their project birds. But you can never assume! I have so much to learn. 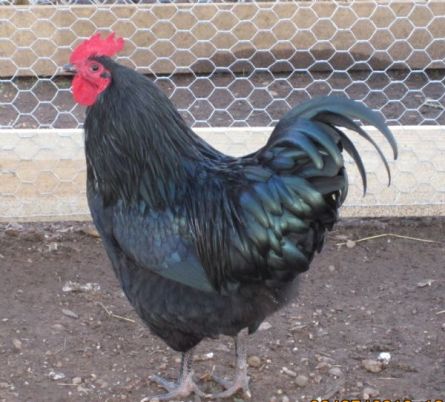 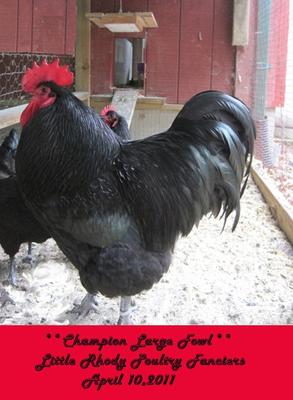 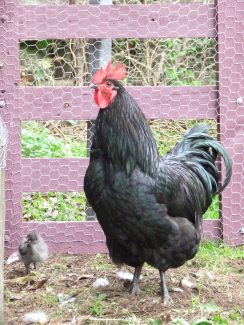 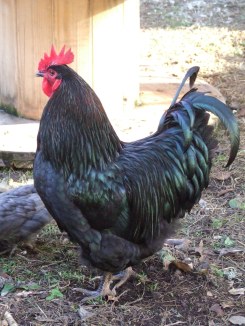 I am inclined to think that Elrond might be a cross between an Australorp and a Buff Sussex. Aside from the colouring, the rapid growth rate of his son, Mr Bingley, encourages me to lean that way. Also, Mr Bingley’s sisters don’t have flicked up tails like the Barnevelder, but are more flat along the back and fluffy underneath, like the Buff Sussex. Mr Bingley had the least red in his feathers out of the boys and The Smoky Chick had the most, including buff on his chest, and very light brown eyes. I will never know for sure. It will be very interesting to see what sort of eggs the girls lay. C’mon little ladies!

Alright, that’s enough genetic speculation for now. More about the youngies! It is nice to see Mr Bingley growing into his rooster role but at the same time I have been feeling some trepidation. Is his behaviour going to change towards me? Is he going to attack me one day? I really hope he doesn’t go down the route that his father did but at least this time I’m more aware and prepared to catch him and ‘squash’ him when I need to. He must always know that I am the boss. I have ‘squashed’ him a few times already. I needed to catch him to put the crow control collar on, and adjust it, during the day so I could observe him, as his crowing has gotten louder and more frequent. He is still very good to handle so far. He settles fairly quickly, he doesn’t have flapping fits like his mother sometimes does (even though she’s the most-handled one), he doesn’t bite and sometimes he closes his eyes when I pat him. I cart him around for a while and make sure to hold him down on the ground in front of his ladies, as that is important. I will try to do this every so often to reinforce the fact that I am in charge.

I am also very aware of how I react to Mr Bingley. One of the main ways chickens maintain their hierarchy, as observed in my flock, is by having stare-downs. The lesser ranking chicken will end up walking away. So if I feel like Mr Bingley and I could be having a stare-down, I remind myself not turn or walk away until he has first moved. If he doesn’t move I will move towards him and maybe chase him a little. This does not make him outright scared of me, it tells him that I am in control. Chickens often chase each other as it is part of how their system works.

Mr Bingley is bigger than Frodo now and the young girls aren’t far off her size. The blackies, Lizzie and Lydia have big red combs. It will be interesting to see at what age they start laying, as all my older chickens reached laying age in winter, so it took longer for them to begin. It’s usually 20 weeks plus for Australorps. They are 18 weeks now. One night I got Lydia out of the coop and was talking to her as I treated her feet, then put her up on the roost when I returned her so I could get the ones who hadn’t been done from the floor. The young girls still seem to be mostly sleeping on the floor, while Mr Bingley has taken up residence on the roost. Frodo is a bit of a roost hog. Anyway, I got the next blackie out and when I got into the light of the garage I realised I had Lydia. So the first Lydia was Lizzie. Whoops! I had thought Lydia was being more cooperative than I remembered… When they’re out and about it’s easier to tell them apart as Lydia and Frodo are Mr Bingley’s favourites (and the top females) so they stick close to him, with Jane a little further away and Lizzie a little further away again. Lydia is Mr Bingley’s particular favourite. She is also very curious, coming quite close when I am round about the chicken pen.

All the youngies will eat out of my hand. Things are a bit more weird in the morning now, as Mr Bingley’s first priority is to get someone to mate with him, which usually involves chasing and dancing. The girls are wising up to his approaches so he’s learning to dance and tid-bit more. He will still eat out of my hand a bit but I am careful with his spring friskiness. The last few mornings Frodo has been sitting in the nestbox laying first thing in the morning, screeching at anyone who comes to close, including Mr Bingley when he tried to dance for her inside the coop. He was slighted. Hehe. This bodes well for broodiness soon. Frodo has had two broody episodes this season already but I wasn’t ready with fertilised eggs at that point! That chicken is a determined broody.

I’m feeling proud of my youngies. They are so beautiful, even if they’re not purebreds. Having fast-maturing chickens is actually an added bonus. I’m very curious to see what Mr Bingley’s offspring could turn out like. Would the red keep getting more dominant or would it start to disappear? And how does the red affect the girls? Jane is the only one who has a few wee bits of red on her neck. At some point I need to inject some new genetics into my flock but in light of my chicken troubles I’m just working with what I have right now. I have a large amount of eggs saved and a couple of eggs and golf balls in the favourite nest box. I’m Just waiting for Frodo’s broodiness to return now…

4 thoughts on “Where Did The Feather Babies go?”