We went on holiday, The Husband, The Little Fulla and I. We don’t manage to go on holiday very often and this was the first holiday we’d had not staying in someone’s house since The Little Fulla was born. We stayed in a cabin at the beach. There was much to do and much to take.

Naturally, things got nuts before the holiday. Lydia had her second vet visit for bumblefoot, for which I was thankfully only charged the script fee. I have become rather attached to that nutty chicken. Her foot wasn’t making much progress and we suspected there was still some deeper core in there. Lydia was a bit off her food too and losing a bit of weight. I wasn’t at all certain about her future at that point and I started to prepare myself in case I had to make a tough call before we went away. I would not pay for her to have surgery. My helpful avian vet told me how to make a foam shoe and sent me off with some printed photos and another week of antibiotics. The Husband then helped me make her the shoe out of a pool noodle and I had a last-ditch attempt to dig out some core, in which I managed to get out an awkward piece wedged down the side of her lesion, without cutting everything else out. Wait, a pool noodle? Yup. We cut a piece long enough for Lydia’s foot with claws resting over the edge, then cut it in half, then sculpted out hollows for the toes to rest in. Next, I cut a hole lining up with the foot lesion, held the shoe in place, stuffed the hole with antibiotic cream, then bandaged and taped the shoe on with a cohesive bandage and waterproof tape. Well, that shoe is genius! With that plus the bit of core I dug out, her behaviour changed the next day. She was eating well, she was moving around a lot and she was more chipper. She continued to look well until I took her shoe off for the moment of truth after a week. The progress in her foot matched the progress in her behaviour. Phew! It still had healing to do but the swelling and hardness had gone down and the lesion was red instead of the brown or black that typifies bumblefoot infection. After putting the shoe back on with more cream, Lydia was moved to Outdoor Chicken Hospital, courtesy of the little boys’ departure, and she celebrated with a gloriously long dust bath.

Images from a bumblefoot experience. This is Lydia’s bumblefoot lesion near the start of one of her earlier foot procedures, after soaking, massaging and starting to dig bits of core out.

This is the same foot lesion after an iodine soak after coming back from holiday. This is a picture of improvement. Note the swelling in the whole centre of the foot has gone down and the lesion is red rather than dark brown or black.

There have been a number of versions of the foam shoes cut from a pool noodle. This one was carved out by The Husband but the indents are much too deep and wide. The shoe didn’t last very long as the chicken’s foot pushed through the thin layer of support. 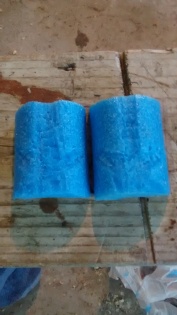 Some foam shoes I cut with scissors. Sure, the indents aren’t as smooth as The Husband’s ones cut with a knife but they are much shallower so the shoes will last longer. The holes above the lesions haven’t been cut yet. 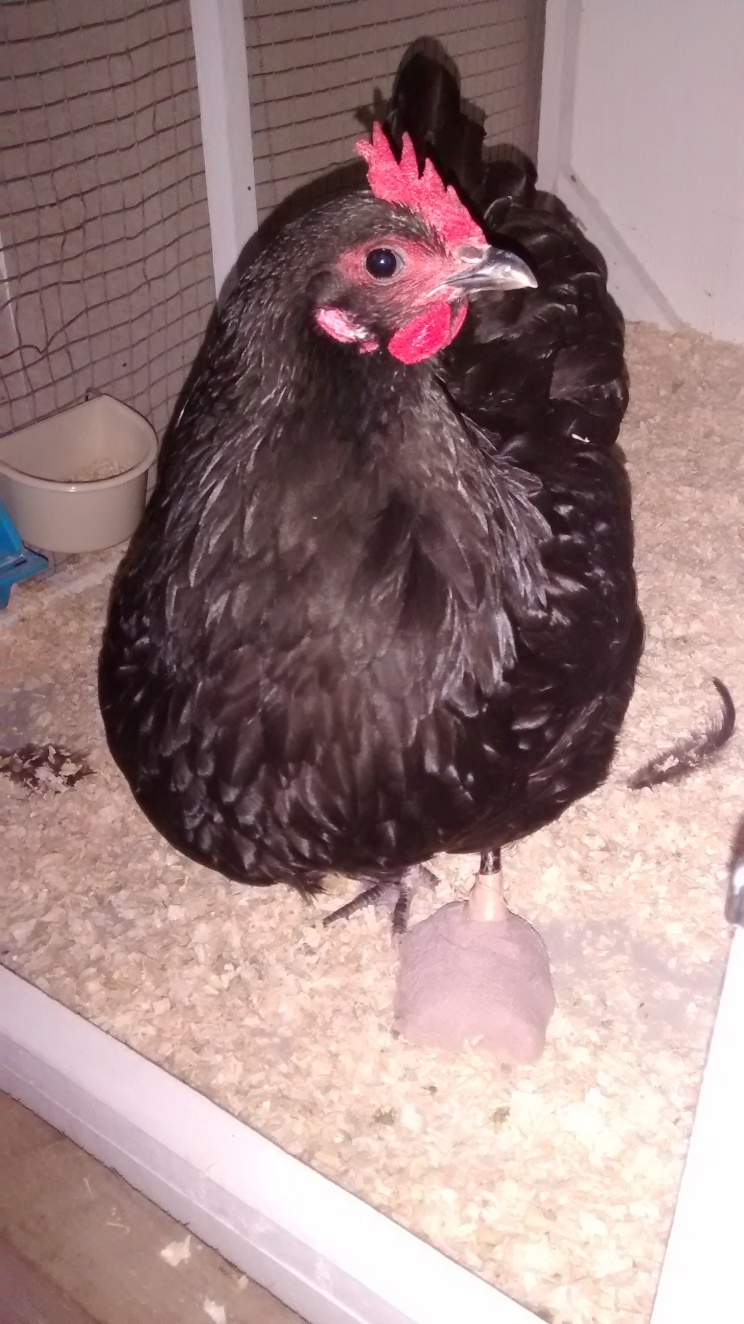 Lydia with her very first foam shoe, bandaged and taped onto her foot.

Meanwhile, I was not taking any chances with Jane’s small bumblefoot lesion, so she got taken out of the coop every evening for a foot soak in a cage on an iodine-watered towel. Her foot then had antiseptic cream applied and was re-bandaged.

Five days out from our holiday the little cockerels were sold. Hooray!

Four days out from our holiday my assignment was due… and finished.

Three days out from our holiday The Little Sister-in-law got married. It was a lovely day, great to spend time with family and friends and we are so happy that The Little Sister-in-law and The Little Brother-in-law found each other. Warm fuzzies all around. Until that evening, when the last of my pre-holiday chicken check-ups revealed that Lizzie had bumblefoot on both feet. WHAT?! I can barely describe how I was feeling. Mortified. Puzzled. Hard-done-by. Dejected. Hopeless. Now all three Benett girls had bumblefoot. I hadn’t noticed Lizzie limping but I had been so busy with Lydia and Jane, plus all the other things, that I was behind in Lizzie’s check-up. Both her feet were crusty and swollen on the underside. That night and the next two days she got iodine foot soaks and bits dug out of her feet. Her case was different from Lydia’s, with lots of crustiness but no one lesion as big as Lydia’s. However, there were lesions on the main toe of each foot as well as the soles of the foot, so it was hard to say if it was ‘better’ or ‘worse’ than Lydia’s. Iodine foot soaks are really helpful for the crustiness. The problem is, we were going away, so after the third crack at her feet, complete with a non-complying, quick-to-bleed toe lesion, the foam shoes got a new challenge. I stuffed the shoe holes with antibiotic cream then bandaged Lizzie’s feet with the last of my bandage AND tape supply and re-introduced her to Lydia in Outdoor Chicken Hospital. Note to self: Do NOT run out of bandages and tape when feather children have bumblefoot. Skimping on bandaging and tape = dirty feet. There was a very small amount of fighting as they decided who was boss, and, interestingly, Lizzie remained boss.

I thought Lydia was nutty but Lizzie was almost wild to handle at first. She made determined (and even once successful) attempts to escape and when I wrapped a towel around her to prevent flapping she screamed blue murder and it really sounded like she was squarking, “HELP! HEELP!” It was not doing anything to help the situation. But at least once I put her on her side she shut up and didn’t kick and claw as much as Lydia. I should have been handling her more as she got older.

After cleaning the coop, hospital cages, water bells, feeders, towels and cloths, the chickens were as ready as they could be to be left for a few days. I was nervous, with full consideration to the fact that last time we went on holiday I lost my favourite hen, Strider. But things were different now. I knew a lot more and I did everything I could to prepare the chickens for time without me. I hoped everyone behaved themselves, but really, they were bound to get up to something. I was imagining Mr Bingley getting out and having a little vege garden-wrecking adventure, one or more chicken shoes being forcibly removed and Frodo being found in the coop being broody.

The morning of our holiday was spent speeding around finishing the packing, loading up the car, watering the pots and vege garden, making sure the animals were all set with heaps of food and water and making sure everything on the lists, which seemed to be invisible to The Husband, had been packed or done. It was suitably nuts, and The Husband had helpful comments to add like this: “What are you doing?” “I’m getting ready.” “No you’re not, you’re just drawing on your face.” Needless to say, the beach holiday was characterised by much blobbing around and restful disregard for whatever else was going on in the world.

Upon arrival back home I was surprised to find that the only things amiss were that Lizzie had lost one of her shoes and Jane had lost her foot bandage. They still had food and water, thanks to The Big Sister-in-law topping everything up, and no-one died! Chicken check-ups revealed that everyone was fine except for the three Benett girls with their varying stages of bumblefoot. Jane’s had gotten slightly worse without her bandage and foot soaks, but Lydia’s and Lizzie’s were improving. And so, we continue with the foot soaks and funny shoes. Except that we went away again for two days a few days later… It is nice to go away and catch up with family and friends but I’m looking forward to a little bit less nuttiness now and having the time to get the chicken’s feet sorted out properly, as well as many other things around the place. Lydia rejoined the main flock this morning, still with her shoe on. I will check and re-do it every now and then until the lesion heals. Mr Bingley is extremely pleased to have Lydia back, although he has been escaping to try and rescue Lizzie from Outdoor Chicken Hospital. It doesn’t help that Lizzie keeps calling for him. Those two are smitten with each other. But in the mean time, Mr Bingley and Lydia have been very close. Poor Jane is just over there somewhere again. And Frodo? Well, there’s the matter of the broody Frodo that I had to leave in the coop when we went off for our second, overnight holiday, who is now super-broody Frodo…

5 thoughts on “What’s a Holiday Without Pre-holiday Nuttiness?”