Last week was a weird one. The Little Fulla and I were quarantined at home alllllll week as he has been recovering from the flu and further medical issues arising from it. The only time I went out was for doctors visits. Some days I felt like I got nothing done other than comforting and mothering. Other days I actually got some good things achieved.

While I was on a role with decluttering, my mind was bent on sorting out The Husband’s desk. This was what one side of his desk looked like before I got stuck into it.

After I had sorted out his desk, my eye fell on the bookshelf and my computer area beside it. Before I could stop myself, I was pulling out drawers and piling up books all over the lounge, moving The Husband’s desk over a bit so I could move the bookshelf over a bit, then moving my desk over a bit the other way so I could fit my computer in a gap just right for it. Then I rearranged the shelves and got rid of more clutter so the area is looking much more tidy and is more functional. This filled me with great pleasure.

I managed to prune three small fruit trees on one of the sunny days, which is all I thought I could do and I was happy enough at that. I pruned the apple tree outside the living room window and did some minor structural pruning on the young mandarin and orange trees in the Plum Tree Garden.

Then… The Little Fulla had a long nap. And this happened.

I made another pruning mountain. Actually two. But I’m not sorry! I had a long pruning session with the old apple tree down the back.

Most of the growth was leaning over into the neighbours’ paddock, so I spent a while in there with the telescopic pruning saw. As I was piling branches back on our side of the fence, I turned around and just about jumped out of my skin when their two pet sheep were right behind me, sniffing my legs. From then on, my job got difficult as I had to try and keep the over-friendly sheep away from me while I was sawing down high branches. Some of the branches still had a few leaves on them, so throwing these a few metres away from me helped, as the sheep went off to nibble them. Inevitably, they would come back right as I was getting to the crucial part of sawing.

I got all the branches cut back to the fenceline and even moved the two pruning piles onto the fig pruning pile for cutting, before the chickens could get any ideas of climbing to a great escape in the paddock beyond. 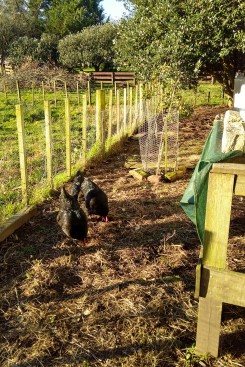 No more apple pruning piles! Not here anyway… And look, the neighbours have a pruning mountain too. I’m not alone.

The only problem is that now there’s a giant pruning mountain. It dwarfs the old Pruning Mountain that we haven’t been able to finish dealing with yet. Also, I haven’t finished pruning the apple tree. I’ve started on the branches on our side, but it needs such a heavy prune to try and bring it back into alignment. So there will be more branches. And I apologise if you’ve got a Britney Spears song stuck in your head now. Don’t worry, you’re not alone.