Winter has bitten us here. We’ve been having some family ‘togetherness’ the last few weeks in the form of sickness. This means everything has slowed down. However, in the middle of the sickness we found ourselves in a heartwarming little animal story.

It all started one cloudy winters’ afternoon. The Little Fulla and I were outside having just checked for eggs, as the chickens were making a ruckus. But there were no eggs. Suddenly, I spotted something moving in the empty chicken pen, the Orchard Pen. It was a kitten, fitfully tearing up and down the fence lines, trying to ram its way through the chicken wire and escape. I soon realised it was too hard to catch with my hands so I quickly retrieved the big net from the garage. The kitten was freaked out and feisty, with claws swinging. I had to get The Little Fulla to hold down the netted kitty while I ran to get some gloves. I was scared it was going to escape, but somehow, it didn’t.

Once I was holding the kitten, it calmed down somewhat, which was a good thing, as it had a toe injury that I needed to deal with. After cleaning up the blood I could see that the kitten had a slice through one toe, with the tip of the toe hanging off. It didn’t look bad enough to require a vet visit, thanks to my chicken first aid supplies. The bandage didn’t last on it for very long but I continued to put an antibacterial on it for a few days. The kitten came inside with us in a cage to get warm and rested up. And thus began our adventure.

I assumed it was a farm kitty from its behaviour. It was very nervous and spent most of the time running fast and low to the ground, hiding under everything imaginable, shooting from one hiding spot to another. There were a few times we actually thought we’d lost it. It also had the nose of a scavenger, sniffing out our lunch or any food that came out, as quick as a dog. But it wasn’t really feisty, after the first day, so there was hope. It was scared of the sight of a hand reaching for it or the sight of a person just walking into the room, but once we actually caught it and held it it purred when we rubbed its face. I gave it a dose of flea/ worm treatment and we waited to see if anyone would claim it while it underwent housecat therapy with us.

As the days went on, its toe started to heal and the damaged tip fell off during play. It had a voracious appetite and I had to up its meals to four a day for a few days, after which it started to put on weight quickly and its fur started to get shiny. It slowly built up confidence while we fed it, played with it and snuggled it. After 1 1/2 weeks I took it to the vet to get it checked and see if it had a microchip. This was the point of no return. Although I thought it unlikely that it was owned by anyone, I was nervous, because the kitten had jumped into my heart, all of our hearts, and after putting so much work into it and watching it go from an underweight, frightened creature to a shiny, happy household pet, I really didn’t want to lose it.

There was no microchip. The vet said we’d done a good job looking after the kitten and confirmed its sex, which I had figured out correctly. It was as well, for I had already given it a name. It was around 12 weeks old at that point; older than I thought because it looked younger than what it actually was when we found it. I got the kitten its first vaccination. Now there really was no return from keeping this kitty! We will get desexing done soon and continue the vaccinations. I can’t say the eldest fur child is entirely impressed, but she’s learning to cope. And although she doesn’t play much these days, being 12 years old, she took a sudden interest in the scratching post that I made.

I made the scratching post from an off-cut of one of my plant table legs and a piece of plywood for the base.. It’s no flimsy thing – the timber post is around 10 x 11cm across and 62cm high. The carpet was left over from the house carpet laid by the people before us. Another free build!

All finished. Now the fur baby can stop sharpening his claws in the firewood basket. 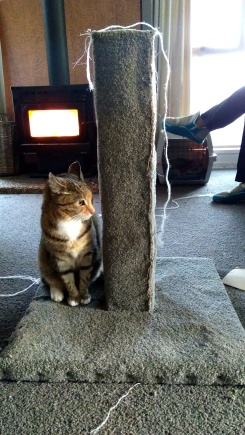 Nala, eldest fur child, suddenly took an interest in the scratching post. “This post is now mine!”

All I can say is that this kitten was a direct present from God to me. I’ve had up and down trouble with my health since getting bronchitis last year and although it’s hard to understand why my body won’t just go back to normal sometimes, this kitten was a reminder that God knows the desires of my heart. It wasn’t a secret to some that I’ve been wanting another kitty for quite some time, since we lost our dear Ninja in Christchurch actually, but God was the only one who knew that I specifically wanted a tabby kitten to call Simba, to go with our older cat Nala. It might sound silly, but that was what I wanted. A Nala and a Simba. However, buying a kitten wasn’t exactly in the budget. What are the chances of finding a kitten on my own property that is a tabby colour and a male and being able to catch it and keep it? It blows my mind and I feel extremely blessed. Simba brought all of us a shot of joy while we we’re sick with a nasty winter bug.

After a few weeks, Simba is like a different kitten to the one we found. He is snuggly, demanding, playful, a bit naughty and very purr-ey. He doesn’t slink around anymore, he gallops around with confidence and he comes when we call his name. And we love him very much.