Homemade chicken soup is actually quite easy to make if you have a slow cooker. I’ve been talking to some people about it lately and as I started talking about how easy it is, I realised that understanding it isn’t straightforward for people who are used to soup that comes in a packet or tin. A great way to make chicken soup is with a whole chicken. But some people are scared of using a whole chicken. It’s like a hulking great lump of meat that they don’t know how to deal with and don’t want to risk screwing up. That’s ok, I will teach you one way of using a whole chicken. I remember that before I started butchering my own chickens I rarely used whole chickens too.

To make this soup you need a slow cooker big enough to fit a whole chicken in, or else a bunch of chicken portions (thighs, drumsticks and wings), but bonus if you can get some of the more weird parts in there (feet and neck) for more goodness. If you’re using store-bought chicken it is usually cheaper in the frozen section. You can certainly do the soup in a big pot but that requires more time commitment to keep an eye on it, so I will deal with the slow cooker way here. The basic gist of the soup is this.

Chicken soup is pretty forgiving, meaning you can adjust herbs or spices and add extra veggies and carbs according to your tastes and what you have available. The basic building blocks of the soup are chicken, onion, garlic, carrots, celery and stock. Once mastered, the soup can accumulate further additions such as:

You can also fry the veggies first to get a more full flavour, but we’re keeping it simple here.

Alright, let’s do it! 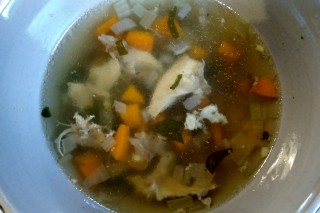 Use a whole chicken and a few basic vegetables to make a healthy, nourishing soup for your family.

Place the whole chicken into the slow cooker bowl. Cut off the drumsticks if you’re having trouble fitting it in.

Cut the vegetables and put them into the bowl: dice the onion, cut the garlic finely or mince it, slice the carrots and celery into thin slices or cut them in half or quarters lengthwise first if you like smaller pieces.

Put the herbs in the bowl: whole bay leaves, chopped parsley, thyme leaves (removed from stalks) and the whole sprigs of rosemary.

Pour the stock into the bowl.

Pour enough water into the bowl to just cover the chicken.

Set the slow cooker to cook on slow for 6-8 hours. It is ready when the chicken is soft and coming off the bones easily and the vegetables are soft. Cooking longer will concentrate the flavour more.

Take the bay leaves and rosemary sprigs out of the slow cooker. Take out the chicken with tongs, fishing around for any bones that have fallen off, and place it on a chopping board. When it’s cool enough to touch, remove all the chicken flesh, pulling or chopping it into mouth-sized pieces. Put most of the meat back into the soup and save some to use for another meal like pizza, sandwiches, toasties, omelette and so on.

The flavour will differ depending on what stock you use and you can always add more next time if you want a stronger flavour.

If you haven’t got access to fresh celery you can use celery seeds to give some celery flavour.

Feel free to add extra vegetables or grains or experiment with spices like ginger, turmeric or cayenne pepper.

If you like a creamy soup you can also stir in some cream or coconut cream at the end of cooking.