A few days before lockdown started we had a surprise visitor on the homestead. I was pushing the lawnmower back to the garage when I became aware of something coming up behind me. At first I thought the furry brown thing was a cat but my jaw dropped as a possum lolloped past me, past The Little Fulla and into the garage. Um, what?! When I got to the garage the possum had scaled the wall and it stared at me from up near the roof. Then commenced a great spectacle. I quickly got the chicken net, which is a large fishing net reserved only for very difficult chickens, and stray kittens, and apparently unwanted critters, and commenced a trapping dance with the possum as he scrambled all around the wall, peeing on our light and workbench in the process. A jar of screws crashed to the floor and broke and, although it was hard to tell, I’m pretty sure the possum made more mess in the garage than there was before. But I got him. He was not impressed as his only exit from the net became one of my plastic chicken cages.

Once caught, I had to figure out what to do with it. In other words, I had to figure out how to kill it. Possums are one of the major pests in our country, eating native birds eggs, and probably chicken eggs, and eating fruit, both our fruit and the berries that native birds need. Nobody wants possums around here and it’s actually illegal to release them. I tried to find someone who could help dispose of the possum. Then I found some instructions on the council website for how to kill a possum. Yikes. It’s more intense than killing a chicken or a hedgehog. But, I determined that I should probably do it. I went out there to size up the possum and assess whether I had enough clothing layers on to ward off injury from its teeth and claws. As I stared at it through the metal cage door and wondered how it came to have one cloudy, probably blind eye, it suddenly bolted straight through the door and shot off, way faster than it moved before! Of course I had grabbed the cage with the dud latch, because that was the closest one. Argh! It must have known what I was thinking and its last surge of strength shunted the door off its partly broken holder.

The possum appeared to have gone under the deck, where the wire netting barrier had been pushed up to make an entrance hole behind the BBQ. Well, I fixed that. The possum would not be getting out that way. Days passed and we never saw the possum again. The Husband thought it probably escaped from some other exit, but I can’t see where. Maybe it died of injury or sickness. It did have the weird, cloudy eye and it was very odd for it to be out in daylight. I was disappointed that it got away from me, but at least I tried to deal with it. If I ever happen to catch another possum I will have a better idea of how to deal with it. But I hope I won’t have to.

We have been gathering walnuts from the ground under our tree. The pears have finished now but we’ve still got apples and now feijoas. Hooray! I can’t wait until more of the fruit trees mature.

It is stormy here now. I managed to get some veggie seedlings potted up before it got too crazy and now we’re nice and cosy with the fire on for the first time during the day this year. It’s supposed to be rainy all week and I have high hopes that this amount of rain might break the drought. My janky downpipe fix to the garage rain tank somehow worked, despite the lack of effort I put into it. Somehow the garage rain tank is now full!

I found a soggy bread crust sitting in the pool of water on the tank lid. When I questioned The Husband about it he said he may have thrown it into the chicken pen from the deck a few days prior. Yesterday morning he came inside with a very guilty look on his face. After some prodding, he said there were crusts on the carport roof. “How do you keep throwing bread in stupid places?” I asked. “You just walk up to the chicken pen and tip it in.” You know you’re not getting enough exercise when you attempt to throw stuff into the chicken pens from the deck instead of walking the short distance over there… Needless to say, the guilty-faced man was made to go and rake the crusts off the just-cleaned roof before they turned into a soggy mess.

I’ve knitted two more baby hats for The Little Sister-in-law who is having twins. I’ve been experimenting with fair-isle knitting to make different patterns.

All the knitting doors seemed to be closing and I just wanted something to knit on these cool Autumn evenings at home. “What am I supposed to knit?!” I said to God. Then, an idea dropped into my head. I could knit some hats for kids or adults who might be in need of warm hats for the winter and find somewhere to donate them to. I have a bunch of 12 ply yarn that I don’t have any purpose for and a simple hat pattern for 12 ply yarn that I’ve used to make hats for both The Husband and The Little Fulla, and thus I have got the knitting needles for it, so I might as well use it to help other people. So, I guess I’m knitting more hats. 2020: the year of the hat.

We had a pretty quiet Easter weekend, after I finished building the chick feeder box. The Little Fulla and I made an Easter garden, which he enjoyed playing with. When I left him he had introduced a bunch of animals to the garden, and a Lego man, and when I came back, well… Everything had been tipped out of the garden, there was a pile of mud in the middle of the lawn and in the back of the trike, because water had also been introduced to the garden, and The Little Fulla was covered in mud and doing forward rolls with his head in the mud patch. Mud seems to be a daily theme here at the moment. I guess he’s making up for months of water play withdrawal.

The Husband and I made some Easter eggs for Easter Sunday. We already had the moulds and dark chocolate. I also made some crosses with the leftover chocolate. I was trying to relate the hollow Easter eggs to Jesus’ empty tomb and The Little Fulla, with his usual matter-of-fact opinions, said, “Next time, put a Jesus in it, ok?” I have not managed to find a tiny Jesus chocolate mould yet. But I did find a tiny fart egg in the coop, the tiniest egg I’ve ever seen. 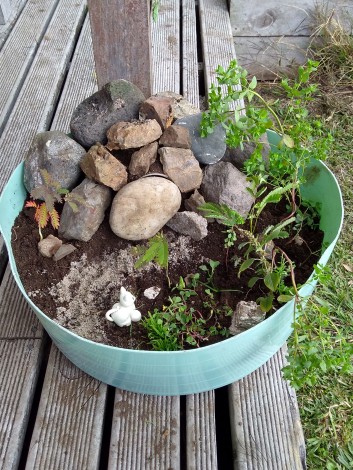 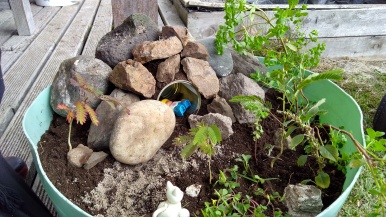 We couldn’t find the Duplo man, so the girl became the Jesus substitute. And, of course, the cat had to come too. And then a bunch of other animals. 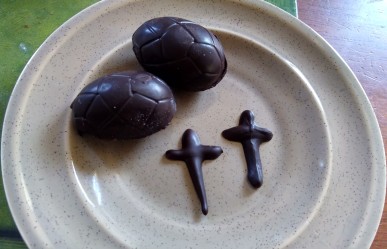 Chocolate Easter eggs and crosses. There’s no need to buy Easter eggs when you can make them for much cheaper!