The feather babies are 2 1/2 weeks old already. Where does the time go? To be honest, I’m surprised that all eight are still alive. Not because I’ve been looking after them badly or anything, but you know. I haven’t had the best luck with chickens this year. These chicks sure are tough. I am liking Australorps more and more. I just hope they’re not all as broody as Frodo has been. We do need some eggs. Some day…

Jane is at back, behind Lizzie. 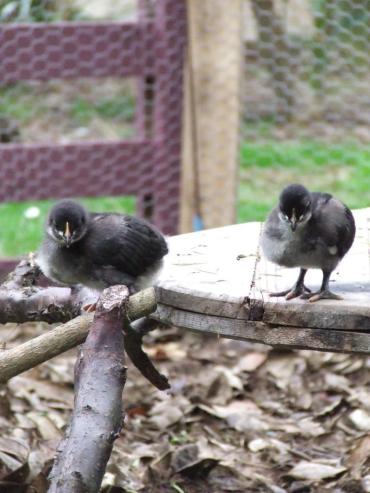 Life has been full throttle around here. I would like to announce that last night The Little Fulla went to bed and went to sleep. Without any further parental support. Huzzah! It has been rather a while since that happened and it is in stark contrast to a week ago when it took all evening to get him to sleep. This evening he needed a couple of quick visits, but still, I have so much time in the evening I don’t know what to do first. It’s a toss up between tackling the housework mountains or doing some leisure activities. A bit of both will do. The mountain of laundry hasn’t tried to attack me yet so I think we’re ok.

Around the time the chicks were born I noted that Sam had signs of scaly leg mite. I treated her and Legolas’ legs first (I couldn’t catch Elrond at the time), but after reading up on it, I made a big effort to catch all the adults and treat them, then do a full coop clean and treatment. This had to be done on a Saturday, when The Husband was around to look after The Little Fulla. Then last Saturday,  I had to repeat the process AGAIN to break the cycle of any mite eggs that might have hatched after the first treatment. Argh. The scaly leg mites are microscopic so it’s hard to know. As you can see, my Saturdays have been so exciting. Even with my new sprayer for the chicken coop it takes ages to clean all out all the wood shavings, spray all the surfaces, let the coop dry, refill it then catch all the chickens in early evening when they are supposedly, sometimes, eventually calmer. You’d think it was the end of the world the way some of them carry on. Poor Frodo gets upset at being held while her babies peep away, Legolas has been hard to catch after apparently taking lessons from the others, Sam makes a huge fuss about being caught but goes all soppy as soon as I have a good hold of her and Elrond struggles a lot and is very strong, so I have to hold on for dear life. I saw him close his eyes when I started stroking his comb though. Ha.

The chickens have been more fun to watch since Frodo started bringing her babies out and about in the pen with everyone else. Now the flock spend most of the day together and some interesting things have been going on. Legolas has been chasing the chicks a bit, mainly around the food container and treats bowl. I’m not entirely happy about this but it is expected for the lowest ranked hen to do the most bullying. The chicks are fast and have learnt to move before Legolas gets too close. In contrast, Sam, the boss, is lovely with the chicks and will let them eat at the same time as her, run all around her and even take food from her. She is best buddies with Frodo though. She tries to keep Legolas in line with a swift peck every now and then when Legolas gets too bold with the treats bowl. Legolas got a bit spoilt when she was effectively going solo with Elrond for a bit, as she had free reign of the treats bowl and Elrond was feeding her too.

Now that Frodo is back on the scene, eight babies in tow, Elrond’s preferences have been made known. Sorry Legolas, but Frodo really is his sweetheart. He has been keeping close to Frodo and I have seen him making passes at her. Poor Frodo. Give the new mother a break dude! She’s not exactly interested at the moment. I wonder why? I feel a little sorry for Legolas, falling from his top spot, but it is cute that Elrond favours Frodo, as they are the two Australorps of the flock.

Elrond has been exhibiting other interesting behaviour too. As he matures he is taking his role very seriously. He makes sure everyone gets food, well, when Frodo’s not feeding everyone from the treats bowl, and is protecting his flock. Frodo’s chicks go all over the place now, and if some of them are a fair distance from her, Elrond will stand there, guarding them. The other day when I was hanging out in the pen with them (playing hooky from the things I was supposed to be doing), I heard him growl a warning all of a sudden. The others quickly moved up against the garage wall, but some of the chicks were in the dust bath (which he created) on the other side of the pen, so he stood there in front of them. Looking up, I spotted a harrier (a hawk-like bird of prey) circling above us. It wasn’t super low, but it was low enough to make me worried. And Elrond too. Good boy. I walked around the pen for a bit so it would see me and hopefully be deterred. It flew off elsewhere but it does make me nervous. Even though the chickens are relatively sheltered in my yard, and harriers tend to feed more on roadkill, I guess they are not immune to a harrier attack. I am glad I have Elrond though. He is such a good rooster.

Speaking of Elrond’s protective abilities, he had another encounter the other day. I had given the chickens their treats bowl in the afternoon, one of the items of which was contained in said vessel was some leftover cooked chicken. The fur child was hanging around, nose a-twitching. The chickens had polished off most of the contents of the bowl and all but Elrond had wandered off to the run. The fur child, who had been sitting on the fence, jumped into the pen and started to walk towards the treats bowl. I warned her to leave it alone in my scolding voice and at the same time Elrond was eyeing her up. She paused and meowed. Elrond started to move in her direction and chased her right out of the pen. It wasn’t a flurried chase, it was a controlled, “This is my territory” kind of chase. Very amusing. I’m quite glad Nala is scared of Elrond and that he’s taken it upon himself to chase cats away, as cats are one of the dangers to the chicks. I’m not too worried about Nala, as she seems to have a healthy respect for the adult chickens, but there are a number of neighbouring cats around who might not be so respectful. I’m sure Elrond will help them to learn all about respect. I really think everyone who has chickens should have a rooster if they can; they are something to be valued.

2 thoughts on “A Family Flock Affair”