Remember my thinking hat? It got so scared of all my grand vege garden plans that it hid in a dark corner and would only come out when I talked to it softly and told it that everything was going to be alright. Everything is going to be alright. When The Great Vege Garden Expansion Plan has been fulfilled… Things are moving in the vege garden. Change is afoot. The old and decrepit things are being moved out, making space for my new ideas.

In the Compost Corner I have cleared out the random plants, except for the bright pink dahlia, which I was going to re-home to someone who likes pink, but now I don’t know where it is for it has gone dormant, removed the pallet garden, random bits of rubbish and the black plastic compost bin. And some of the weeds. Removing the pallet garden took rather a while as it was full of soil and weedmat, which was sodden from the rain. It was far too heavy to budge until I had pushed most of the soil out, slot by slot, with the little spade. Over and over again. Aha! It had a thick piece of plywood nailed onto the bottom of it, which made it heavier than a normal pallet. In hindsight, I should have just tried to smash it. There’s nothing wrong with pallet gardens, except when you have enough space to make bigger, better gardens. The pallet was rotting anyway so it can get chopped up for firewood. I was going to sell the black compost bin, since I have grander compost plans, but then I realised I could use it for growing potatoes in. Excellent. The little something-in-the-peach-family fruit tree that was by the compost had died so I dug it out. When we moved in it had leaves and I pruned it because it barely had any structure. I suppose I should have taken that as a hint. When I dug it up I saw that it had been planted far too deeply and the roots looked like they had barely grown. I guess it must have been planted not too long beforehand and was just biding its time before it putted out. Poor little tree. 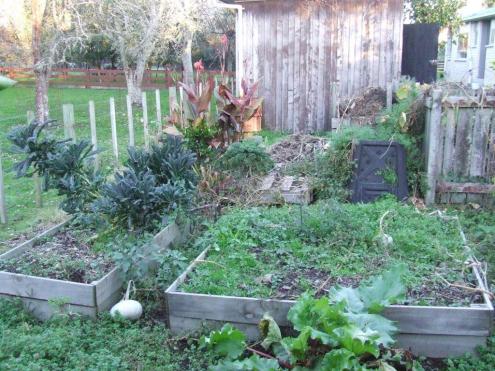 Compost Corner and the old vege beds, not long after we moved into the house. So much work… 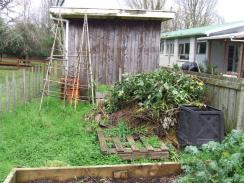 Progress in making the most of the space!

What is left to do in the Compost Corner is do something with the ‘ready’ compost, then move the wooden surround and push the in-progress compost pile into the corner. I want to build a three-bay wood and wire compost bin to span across the wooden fence, which will require moving the compost piles right out of the way, but realistically, that’s not going to happen for a while, at least until the next lot of vege beds have been sorted, so we might as well turn the pile by pushing it into the corner for now. There is a little pile of oyster shells by the rain barrel that I need to do something with. Goodness knows what they are doing there, but if I can figure out a way to crush them I could give them to the chickens as oyster grit. Hmm. We need to do something about that horrible rusty rain barrel too. It has character, but the water is not exactly usable. If I can measure and mark out the area for the compost bins, I can figure out where to put a fruit tree (either my Granny Smith apple or Golden Queen peach, which are in big pots at the moment) and where to site the permanent vege bed. And how big it can be. I even plan to use the space behind the potting shed for something.

And now we move along to the major part of The Great Vege Garden Expansion. The second vege bed. Except there might be more than one. This has been tricky. The original plan for a raised bed identical to the first one didn’t pan out space-wise. I had to figure out what shape would maximise space plus work best to fit alongside the orchard trees and previous/future chicken pen as well as the future raspberry and blackcurrant beds running perpendicular (sort of) to the vege beds, which require removal of the wooden fence coming off the garage and thus are difficult to measure, plus allow space for a gate and path to get into the orchard and chicken pen that’s wide enough to get a wheelbarrow through. Do you see why my thinking hat was cowering in the corner? I got a rough idea of where the blackcurrant bed will run to, closest to the vege beds, as removing the fence is going to take a little more time and muscle and I just want to get a move on with the vege beds first. I laid out planks to suss out the shape of the vege bed, or beds, and measured up so I can figure out how much timber we need to get. It is a little more complicated than a rectangle this time. Luckily, I made a spreadsheet! Like I needed an excuse. *Cough-spreadsheet nerd*

The main part of the new beds is a triangularish (sure, that’s a word) shape, with a narrower rectangle bed at the lemon tree end. This is a convenient shape for something like boysenberries. Yes! I have a boysenberry in a pot at the moment that really needs planting. I have to keep the boysenberries away from the raspberries or they will fraternise. The long edge of the almost-triangle along the orchard side will be the Climbing Bed, for tomatoes, cucumbers, beans and such like. Actually, strike the beans as they’re not safe to be next to the chickens. Raw beans are bad for them. So are green tomatoes, but I’m not envisaging green tomatoes poking through the small chicken wire holes. The whole edge along the orchard will have two stories of chicken wire along it and I will have to get some posts too. The path through the middle of the almost-triangle is for access to the crops without having to walk on the beds or use planks. I decided to fully enclose the Climbing Bed by having a front side, even though it is going to be more expensive, so I can walk along it for all that tomato tying and so forth and also so the roots of the climbing plants don’t get disturbed whilst planting and harvesting other crops.

There’s a lot of figuring out going on.

Next, I need to purchase the timber. Ouch. That was the sound of my wallet dying. I will use the same timber as we used for the first bed, 150 x 50 H4 treated pine two layers high. That makes the beds 300mm high and the sides 50mm thick, so they will be very sturdy and handy for leaning on, sitting on and putting tools on. And they won’t rot any time soon. If you do it well then you don’t have to do it again. I’m kind of loitering around this step a little bit. These beds are going to bring the vege garden to another level, but they are going to cost in money, time and hard work. It really has to be done soon though. I need to get the raised beds done in order to get the chicken wire up in order to fence off the orchard for the chickens, as they could do with a change of space and the weeds could do with some extermination. Also, we need the big long gates that I used in the current chicken pen fencing for, well, gates, to be installed along the side of the house so The Little Fulla can be contained. Everything is dependent upon something else at the moment! I need help. Oh, Husband! He might be hiding in the corner soon too…

One thought on “The Great Vege Garden Expansion Plan”