The feather babies are feathering up nicely so I’m starting to get a better idea of their colours. Well, some of them. I’m also getting some idea of who might be a boy. I had to take the leg ties off the three Legolas babies since their legs have grown so much, but I can tell all the chicks apart now. Leggyleft, the youngest Legolas chick, is feathering up very slowly, despite being one of the biggest and most boisterous chicks. This is teasing of him, as I am sure he’s a boy and looks to be barred, but I want to see more feathers please! According to the sex-linked colour rules with regards to barred chickens, male offspring of barred mum, Legolas, should be barred, and females should be a solid (non-barred) colour. But this is assuming their father, Mr Bingley, is a ‘solid’ colour. I don’t really know what his colour is genetically. Orange Spot definitely looks to be a solid blue (complete with orange eye spot) so I’m hoping that means she’s a she. That brings us to Leggyright, the tricksy one. Leggyright seems to have a decent-sized comb, although they do look bigger when they’re yellow. Leggyright is quite yellow in the beak, comb and legs like Leggyleft but isn’t showing the same darker colouring as Leggyleft. Leggyright has blue feathers, but unlike the almost-Australorps, who have darker lacing around the edges of the feathers, his/her feathers are darker on the ends of the feathers and seem to have some slight barring. I suspect Leggyright is a boy and might turn out to be some kind of blue barred colour. 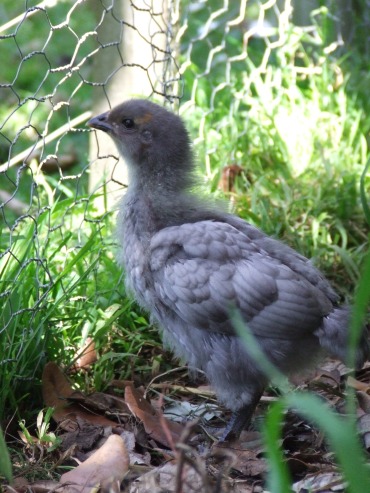 Orange Spot has a different look to her full siblings, the Leggys. She is feathering up faster too. Does that make her a girl? I hope so.

As for the Frodo chicks, I can say that Number 1 is definitely a boy! His wee comb is starting to get pink already. Looking at Splash Dot’s comb I think he might be a boy too. In the splash department that leaves Pearly. Pearly is very white so far, with no splash markings yet. Will he/she get some splashes or be totally white? I don’t know but I hope he/she is a girl, as I’m quite taken with the beautiful pearly-coloured feathers. As always, I’m trying to not play favourites, but you can never help having a couple of favourites! And I can’t help having a thing for dark blue chicks. Penguin is showing the same beautiful dark blue-laced feathers that Mr Bingley had when he was a chick. Oh, I hope Penguin will be a Mrs Bingley rather than a Mr Bingley jnr! It’s too hard to tell what the rest of the Frodo chicks will be yet. Bluefro, Darkie and Tiny all have small combs at the moment. Bluefro has sped up and often plays Boing! on Frodo’s back during rest time or tries to catch a ride while Frodo’s moving. Frodo isn’t particularly impressed with this but I think it’s amusing too. Tiny, the youngest of all the chicks, is holding her own now and feathering up nicely. Darkie has become the ‘runt’ of the hatch, being smaller, slower to feather up and getting left behind more often. Darkie is probably a subordinate female.

I think Splash Dot’s a boy too. 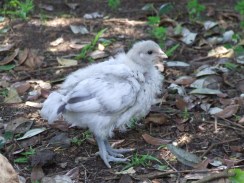 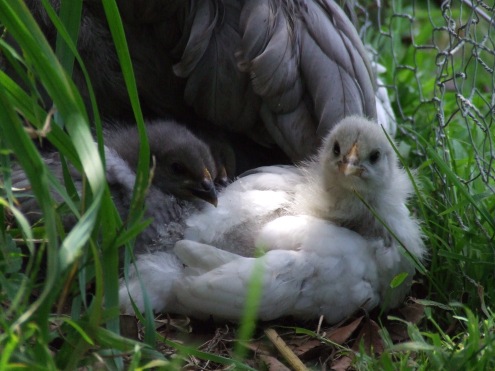 Pearly is pearly white so far. And hopefully a girl because she’s quite pretty. She has a smaller comb than her splash brothers and has been the fastest of all the chicks to feather up. 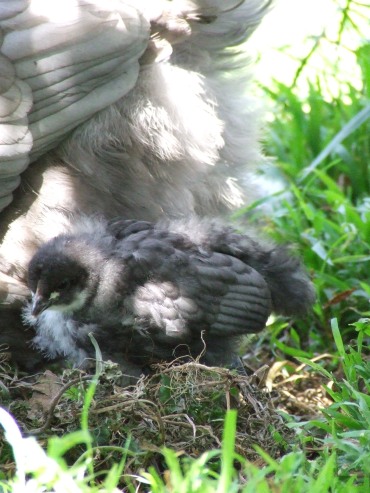 Penguin has the beautiful dark blue lacing of his/her father. But can I have a girl this time? 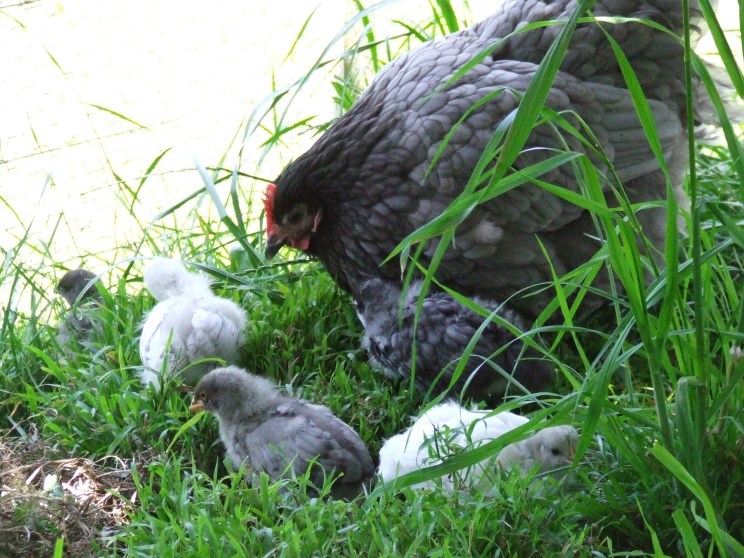 Penguin, next to Frodo, compared to the blue of Leggyright in front.

Darkie is a cute wee thing, but quite shy. Tiny is behind.

Everyone is getting along pretty well now and the chicks are enjoying playing around out in the run. Frodo and the chicks often retire to a spot along the eastern fence where there is long grass and sun, with some shade, to rest. One day I watched Lydia walk up to them and stare at Frodo, as did Legolas back with Frodo’s last hatch, but Lydia came closer and Frodo walked away with babies in tow. I think Lydia was trying to lord it over Frodo and say “I want your spot, so I’m going to take it, because I can. Actually, I didn’t really want it, I just didn’t want you to have it!” Interesting. I have noted that Frodo hasn’t been very feisty since she stopped sitting on the eggs, except for the Lydia attack when she must have felt very threatened. She looks after her babies very well but would rather walk away than fight. She is smart really; I think she recognises the difference between how dominant Lydia is compared to the similar level she was on with previous leaders Legolas and Sam, and probably is with Lizzie and Jane. Frodo has also been more tolerant of me holding the babies since they’ve gotten a little older. I’ve been having holding sessions of a few chicks at a time most evenings and she hasn’t tried to peck me yet! Mind you, I take the chicks from behind or beside her just in case. She doesn’t make anxious noises when I hold a chick like she used to with her first hatch either, which helps the chicks to be more calm. She has figured that I’m not going to hurt them and I will put them back soon. Either that or she wouldn’t mind if I took one off her hands! Leggyleft is the biggest struggler at the moment. He’s such a goer! Hopefully he’s going to behave himself when he gets bigger.