My flock has increased dramatically in size over the last few months. I went from just managing to keeping it going to having 15 chickens. We have four laying hens, which is the most we’ve had so far and the first day I got four eggs was a very good day. With the girls laying 5-7 days a week (when they’re not ill or broody *cough-broody-Frodo-again*) we have a plentiful supply of eggs for the first time ever and I’ve been purposely making things with eggs in them to use them! With another hen or two, or three, we could sell some of our surplus. I’m still considering my chicken numbers with trepidation though, as Mareks has struck before and 10 weeks of age is the mark where it usually surfaces in the young ‘uns. The little chickens are 9 weeks old now. I have been holding off selling any of them until I get to that point, just in case. Partly, because I would hate to lose out on females if my chosen ones got taken out by Mareks and partly because I don’t want to offload potential Mareks victims on unsuspecting people. I know people always face the risks of getting chickens with Mareks, but since I’ve had trouble with it so recently I want to be responsible until I can get a better grasp on it and more confidence in the health of the chickens I’ve raised myself. We have a fairly small chicken gene pool in our little country and people selling anything and everything without regard to what illnesses and conditions they’re passing on is a bit of an issue. To date, Half Pie is the only chicken raised from an egg myself that I’ve lost, but danger lurks around the corner. What worries me the most is having one of the hens fall to Mareks when it surfaces in the youngies, as it did with Legolas last time. I just have to hope that they’re strong enough. 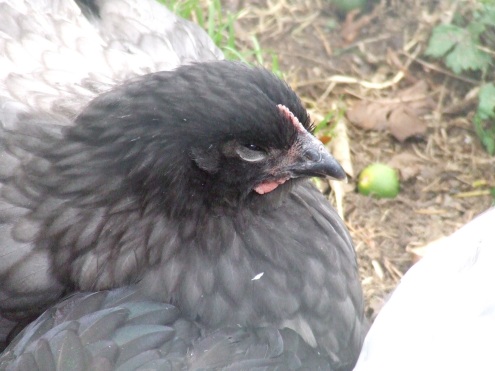 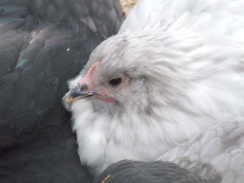 Darkie. You can see some orange bits coming through on Darkie’s neck.

Orange Spot. She is my favourite at the moment. She is just lovely and very curious, like her Mum, Legolas. She was the first of the youngies to eat out of my hand. 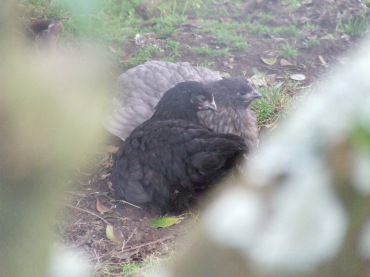 Tiny and Bluefro have their own club this afternoon.

The little cockerels found themselves in a new home a week ago. I set up a temp pen, The Bachelor Pen, for them. The thing is, there are only three boys in there. I have a problem. I think I’ve fallen in love with a boy… Splash Dot is still in the main run with the others. I couldn’t bear to take him out because I’ve gotten attached to him. I’ve been too good at handling them! Splash Dot has a lovely nature. The other boys are rather nice too, even the Legolas boys have settled down a bit, but Splash Dot just about melted in my hands one night, and to top it all off, he is turning out to have some lovely colours. Oh dear. I don’t know if Mr Bingley would accept another male around or not, but I really need more girls if I’m going to keep another boy. What on earth am I going to do with myself? I don’t really want another roo right now. I think I’ll just hold onto Splash Dot a little longer to see how he turns out. Just in case something happens to Mr Bingley. He’s not a rooster, he’s an insurance policy. Do you think The Husband will notice? 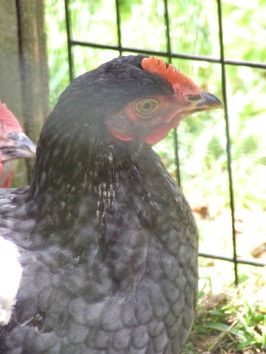 Leggyleft has some beautiful colouring coming through. While he still seems to be blue-based, he has some blue barring and what looks like black and cream barring coming through on his neck, wings and sickle feathers. I managed to catch him yesterday morning when he came up to me for some food and he seemed rather nice. It’s probably a good thing I’ve got him in the Bachelor pen or I might be getting attached to him too. What is it with these boys?

Leggyleft is starting to show his colours.

The other day I was surprised to see Splash Dot attempt to bust a move on Jane. She was lying down near Splash Dot and his group of four little girls when Splash Dot walked up to her and grabbed at her neck. She leapt up with a squark and chased him away. I was most astonished, as he is only 9 weeks old and half the size of Jane. Was he copying what he’d seen his father do or is he maturing even faster than his father? If he’s going to be assertive things could get very interesting around here! I have no idea what Mr Bingley is going to think. On the one hand, he is very assertive with his ladies, but on the other hand I have had to chase the neighbours’ young cat out of the pen on numerous occasions as Mr Bingley will just let it sit in there, watching them. I don’t know why this is. His father always chased Nala away if she ventured into the pen.

Before I could finish this post, Number 1 presented with Mareks-like symptoms. We’ve all heard the saying, “Don’t count your chickens before they’ve hatched” but I have a new saying, “Don’t count your chickens before the 10-week Marek’s.” Ok, so it’s not quite as catchy, but it’s very true here. The feather babies had been doing very well up until this point, with no problems other than several having a touch of scaly leg mite. They haven’t even had an issue with coccidiosis this time. And so it is easy to get lulled into a false sense of security and confidence. Stupid Mareks.

With Number 1 it has been a slow burn, which I have been able to observe out the window. He started off lying down more than the other boys, then he began walking more slowly, increasingly favouring one leg. When I saw him lying down with one foot out the front of him I knew for sure that Mareks had struck. He is in the Hospital Cage in the garage now, with obvious paralysis in one leg. He can still walk around a bit though, getting himself to the food and drink, so it’s not too bad yet. The poor dude. He is the alpha of the youngies and it’s even more disheartening having an alpha struck by Mareks. Legolas was the alpha female when Mareks paralysed her. There isn’t much rhyme or reason to it, as we remember that Jane, who was and probably always will be the bottom female, was struck with transient paralysis last time too. I hope Number 1 will follow down that road and recover from it and I’m doing what I can to keep him comfortable and rested and provided with vitamin water, but at the same time I’m not overly optimistic, as Jane went down rapidly but showed signs of recovery after three days.

I really want Number 1 to recover and find a good home, as he not only has a lovely nature but is also intelligent. This evening I was gardening out the back when I heard the egg-laying song coming from the garage. I did a double-take, thinking Frodo had somehow got into the garage, as it sounded exactly like one of the hens: “Book book book BOOKARK!” When I got to the garage it was dear little Number 1, voicing an exact copy of the hens’ whole egg-laying song, which I have never heard a male do. It was his first evening in chicken hospital, it was approaching bedtime, he was alone and he obviously knew that if he made that noise his daddy, Mr Bingley would come to his assistance. True to form, Mr Bingley replied, echoing his own “BOOKARK!” at the end of each of Number 1’s lines of ‘song’, but he couldn’t come to the rescue. What a clever boy! I’m astounded that Number 1 knew how to repeat the exact noise of the ladies that makes Mr Bingley come running, the first time he tried it.

Also, in this episode of Chicken Hospital, Jane presents with an impacted crop (hard lump of something stuck in her crop) and Lydia needs another foot procedure. Thankfully, Jane’s hard lump disappeared after one night and one morning of me massaging it and giving her some Epsom salted-water. I was so relieved, as impacted crop is the precursor to sour crop. I caught it early this time! I have been watching her closely since she had sour crop and knew something was amiss when she stopped laying eggs, then was lying down more than the other girls, but wasn’t droopy-looking. I don’t know if this is the reason for her stopping egg-laying or not, but we shall see. I think she must have gotten some of the long bits of weeds from the back neighbour’s paddock through the fence, as there certainly isn’t any long grass in their pen now. I am going to have to do a little cutting along the fenceline. Lydia’s main bumblefoot lesion was not healing as I thought it was and it looks like I’m going to have to do another foot procedure on her. Thankfully, none of the other youngies have symptoms of Mareks so far, but they aren’t quite 10 weeks yet. Half Pie was 10 weeks when his paralysis appeared, Jane was 12 weeks, and Legolas got it a month after Jane, so the next few weeks, at least, are crucial. I could be teetering on the edge of disaster, but I am trying to stay positive. Who will survive? Only the strong. And who are the strong? Only time will tell…

13 thoughts on “So Many Chickens”