Don’t worry, this isn’t another post about a chicken with sour crop, it is about the vege crops. The garden didn’t get much attention over the nutty season but I’ve managed to tidy things up a bit since then. One moment it looks good, then the next wave of weeds tries to take over in this hot weather. The veges have gone super nuts too, which is a good thing. Generally. The pumpkins and potatoes think they’re living in the wilds and I have to keep taming them into some semblance of order, at least so I can get down the paths. It’s a good thing I made the main paths wide. And guess what? I actually mounded my potatoes this time. I had to sternly remind myself that last year I didn’t get around to mounding the potatoes and I had told Future Twiglet to MOUND THE POTATOES, no matter what. Future Twiglet listened. Except Future Twiglet is now Past Twiglet. The Little Fulla helped me harvest the potatoes from the two potato barrels, some of which we ate at Christmas, and he was most upset when I took his potatoes away for storing. I had to prise some of the little potatoes out of his hands, after which he sat down in a fit of tears by the compost pile and wouldn’t move. Potatoes are very exciting. 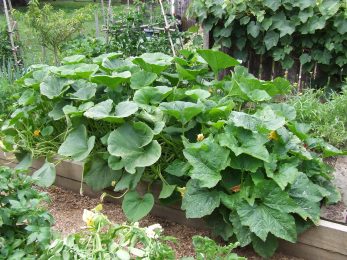 Pumpkins: Wee Be Little is the smaller mound on the right and the intermittently tamed Crown pumpkins are the larger, round-leaved mass.

An Austrian Oil Seed pumpkin. They are fruiting much faster than the other pumpkin cultivars.

How’s this for a good potato bin? It has harvesting doors! So this is what you do with those plastic compost bins you don’t want…

Now Present Twiglet has a new message for Future Twiglet: if the garlic gets rust, deal with it ASAP! This season is the first time my garlic has had an issue with rust. I was unaware of how big an issue it could be. And my garlic crop got walloped. Last season it got some rust but it was at the end of the season when it needed to be harvested, so it didn’t matter. We had a very wet patch this winter and spring, which is why many people ended up with rust on their garlic. The rust arrived on the spring onions and they shared it around. I trimmed back the worst-affected leaves but it was too little too late. My garlic crop was munted. The rust stunts its growth and I was left with weeny bulbs barely worthy of even being called bulbs. Next time I see rust on my garlic I will immediately cut back the affected plants and spray all the garlic and onions with a copper fungicide. At least I am not alone in in my garlic woes. The tomatoes have been slow to get growing since I was slow to get them in, but are starting to get somewhere now. Except for the ones that have early blight and/or a virus or some other unknown thing. Argh! This is not going to be a particularly good tomato season either. 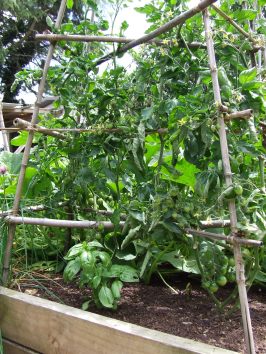 Tomato ‘Black Krim’. The gap along the netting on the right is where there are supposed to be cucumber plants.

Sadly, the cucumbers are a lost cause this season. A certain rooster named Mr Bingley got into the vege garden one day (I think he was punishing me for having sick Jane in Chicken Hospital) and dug big holes by the little cucumber plants, damaging the stems of both of them. One is still in there clinging to life but it’s not doing anything so I need to pull it out. When I went to buy some replacements from Bunnings they didn’t have any so the cucumber spot on the netting remains empty. I suppose it’s not too late to plant a cucumber now if I can source a seedling.

Things are chugging along in the salad greens department. My sorrel is doing very well in a bigger pot by the door and, being perennial, it is an ever-present, helpful, lemony addition to salads. I am very pleased with my wild rocket (Diplotaxis tenuifolia). It is a little more spicy than it’s annual cousin, but it just keeps going and going and the leaves don’t get horribly bitter when it flowers. This means that a) I don’t have to worry about deadheading it and b) it provides some food for the pollinator insects at the same time as providing a continuous addition to salads for us. Perennial salad greens for the win! I won’t bother growing annual rocket again as it just bolts to seed and goes bitter in the heat. The lettuces are growing well despite the heat and dry, with some shade from the pumpkins. Planting them on the south side of some of the pumpkins was a good idea. I just have to keep remembering to stop the pumpkins from smothering them. The kale is doing staunchly well, as usual.

Wild rocket, which is doing so well it was going wild and I had to trim it back.

The carrots seem to be doing well and I am even managing to succession plant them, although the latest lot of seed went in just before Christmas and I haven’t exactly been able to keep them moist. I tried to delegate watering to the rain, but it didn’t listen to my instructions. The beans have been slow to get going, partially thanks to some pesky intruders. A flock of California quail has been hanging out in the area and while they haven’t been in the vege garden as much lately, they wreaked a lot of damage in the early planting stages by digging holes everywhere, particularly along the edges of the raised beds. This caused the loss of a few seedlings and disturbed others. They look so innocent bobbing along but they are fast and fly quite high, so I have not been able to get close to them. The havoc they wreaked on my garden, plus their consumption of my snail pellets, plus their susceptibility to diseases and pests shared by chickens, including Mareks, put them on my death list. Operation Nail the Quail has been a bit delayed over the busy season, but I am going to make a wire trap. The Husband’s grand alternative is shooting them with his homemade bow, which he doesn’t yet have proper arrows for. The day he spends hours hiding in the bushes in order to get close enough to shoot them I’ll fall off my chair. Another possibility is chicken pellets laced with alcohol to make them drunk enough to catch by some means or another. I think we’ll just stick with the trap. 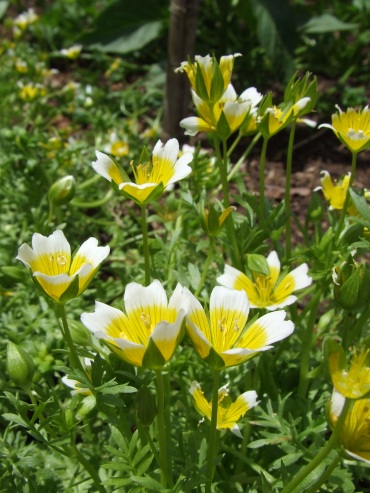 Meadowfoam (Limnanthes douglasii) is for feeding the predator insects. 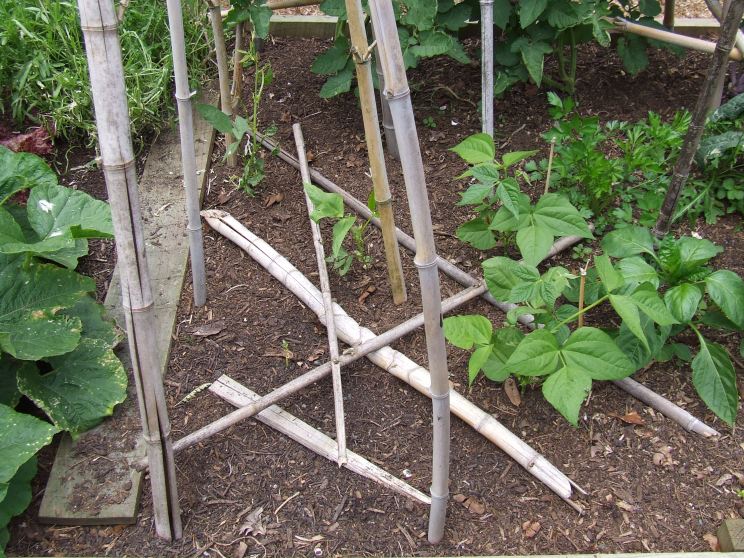 Some of the bean plants, climbing and bush, have been very much thwarted by those jolly quail.

The Atlantic Giant pumpkin plants are starting to take over the compost area. I am supposed to be letting just one pumpkin grow per plant and cutting off laterals and things but the plants have taken advantage of my distraction. The first pumpkin on the main plant was discovered by The Little Fulla and got squished and damaged, so I had to leave the plant to grow another fruit. Now it has more than one and I’ll have to get in there and sort it out. The weeds are trying to take over in this area too, so dealing with them is on my to-do list.

The compost area is getting taken over by Atlantic giant pumpkins and weeds. 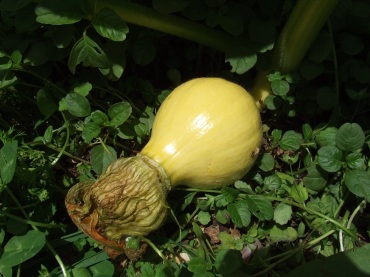 An Atlantic Giant pumpkin. Ok, so it’s not going to be giant any time soon, but it might.

The Herb Garden is slowly chugging along and currently looking very pleasant, despite a mass resurgence of weeds. I have just weeded it so it probably won’t look this good for long. All the soil movement from removing stumps and leveling things out has disturbed the seed bed. The weed seeds of many long-gone weeds are awake and raring to go. My eagerness to get the herbs planted before dealing with all these incoming weed children means I am going to be battling them for a while, but that is the price I’m paying for setting my herbs free from their pots and having them grow lush in the garden. 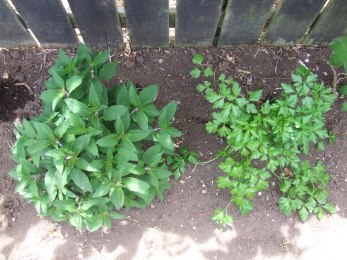 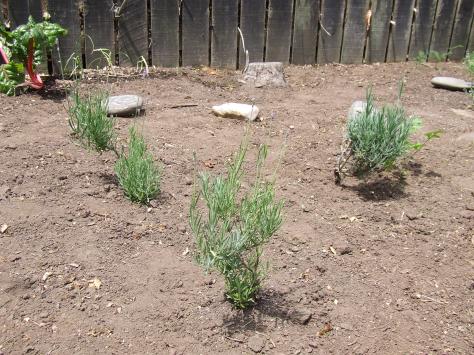 The lavenders are looking a bit scraggly but they’ll come right with repeated light trimming and some time. And keeping The Little Fulla off the garden.

The thyme and oregano are always trying to take over my path.

The edging of Carex albula with purple basil, bergamot and garlic chives behind.

There is a lot more work going on in the rest of the garden, but we’ll save that for another day. I am enjoying busting out my my new garden tools, courtesy of having a wishlist for Christmas: a big, shiny shovel, to replace the one which The Husband broke, and ‘fixed’, which was actually his work one anyway, and a telescopic pruning saw. The pruning saw is a thing of wonder. It extends extremely far and also has a removable head and short handle for use as a regular pruning saw. Now I can tackle all those pruning jobs without having to borrow The Father’s telescopic pruning saw for unexplained amounts of time. Next time I use my saw though, I will check for birds nests. There was a highly disturbing incident in which I discovered, as I hauled away branches from the yellow-fleshed plum tree, that I had not only felled the high-up branches, but also a nest full of helpless-looking baby birds. I put them back in the nest and placed it in the tree, not even knowing what type of birds they were or if they had been damaged, but feeling terrible all the same. Later on, the fur child turned up on the doorstep with a dead baby bird. Then, as I looked out the window while giving The Little Fulla his afternoon tea, she played with her ‘Christmas present’ under the plum tree: the nest of doomed baby birds. As if I didn’t already feel bad enough! Needless to say, the fur child wasn’t very hungry that night…