I have been taking care of a lot of tree business around here lately. Trees have been pruned, trees have been given final notice and trees have been bought. We decided that the yellow-fleshed plum tree was going to get the chop due to its pollination-related performance issues. I haven’t been able to ascertain what cultivar it is, only that it is similar to a Santa Rosa or Fortune, but it is not quite either of those. Not knowing exactly what it is means I wouldn’t know exactly which other plum cultivars would pollinate it, and since we don’t want to end up with three plum trees anyway, its days are numbered. What use is a fruit tree that doesn’t fruit? It’s a bit like people, really. We may look good and seem like we’re going somewhere, but without the right input our efforts amount to nothing. However, if we get alongside someone else who has a vision, passion or skills compatible with our own, then we bear fruit abundantly, and that makes a difference to the world around us.

To replace the plum tree I have bought an ‘All in One’ almond tree, which is rated highly for home gardens, especially in warmer areas. It will just have to wait until we’ve chopped down the plum tree to find a spot in there somewhere. Meanwhile, the Billington plum tree put on heaps of growth after its big pruning last year and I have started pruning it into some semblance of control.

My other option for replacing the doomed plum tree was another apple tree. Not to be pushed aside, the ideas rattled around in my brain and I found a place for one too! While we were in Auckland, we found, bought and manoeuvered into the car a Cox’s Orange Pippin on a semi-dwarf MM106 rootstock. Knowing what the rootstock is is an essential point when buying fruit trees. The future site for the apple tree is in the future triangle garden outside one of our lounge windows, a garden which I have been thinking about for ages, which has been waiting for me to move my pallets of potted plants, which have been waiting for me to clear the plant-growing alcove, which has been waiting for me to move the pruning mountain, which I did, but now there’s an even bigger pruning mountain. Everything in the garden moves in ridiculously complicated triangles and circles at the moment. Anyway, the apple tree is going to provide shade to the sunniest and hottest window during summer, then will return some of the light when it drops its leaves in the winter. Plus, it will give us tasty apples. We had a Cox’s Orange Pippin in my childhood garden and it is well-known as one of the best heritage apples. The advantages of the MM106 rootstock are that the tree will grow to about 4.5m tall; not too tall but tall enough to provide good shade, and resistance to woolly aphid, which the other apple tree in the chicken run is currently having issues with. Here is a handy chart I found featuring the main apple rootstocks available in New Zealand.

The other main tree business that has been underway is the pruning of the cedar tree. It has had most of the branches within reach of the telescopic pruning saw cut off, mostly by me, and a little by The Husband. These branches are massive. Cedar trees can reach 12m wide and our tree is no exception. The branches are heavy as well as very long and had to be taken off in sections so as not to damage anything as they fell. The lowest branches stretching over the chicken run, the neighbours’ place and the garage have been dealt with.

Now I can really see how the cedar tree has affected the growth and fruiting of the apple tree: it is on a distinct lean towards the paddock and most of the branches and apples are hanging over the paddock since the cedar has been crowding it out and shading it for probably quite some time. The whole area is looking better with more light coming through. When The Youngest Brother-in-law was here last night he commented that the backyard was looking nice and open. It’s nice when people notice the difference that a lot of hard work has made. Swathes of ivy have also been hacked down from the cedar tree and the small, insanely twisted Pittosporum crassifolium (Karo) behind it that was splurging over the fence into the chicken run has been cut down too. There is another young Karo still in there so I will leave that one.

The progression of the cedar tree pruning, ivy attacking and general hacking and slashing. 2 months ago. 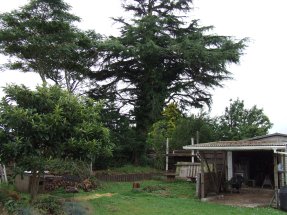 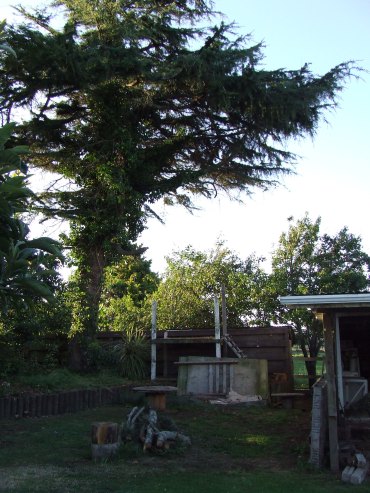 After the last session of hacking, which may have gotten a little too vigourous, I developed some bad ivy rash, despite wearing longs, so I will not be hacking ivy above ground again. My eagerness to get things done makes me cycle between going full guns blazing at the ivy and being extremely scared of it. I think we have gotten rid of most of what we can cut down anyway, aside from what The Husband may like to prise off the trunk for me… Now all that remains is for the rest of the tree to be dismantled, which, unfortunately is really not a job we can do ourselves. While we await an option that won’t make our pockets explode, I am getting a move on with chicken-wiring the fence around the Cedar Tree Garden. I am trying to convince The Husband to help dig and pull out the rest of the ivy from the ground so it doesn’t attack me while I’m crouching down, stapling the chicken wire. Well, I was, but now The Husband has a back injury so I’m on ivy ground-clearing duty again. 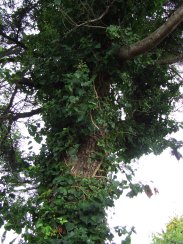 The ivy situation is getting better…

While a lot of ivy has been removed, there’s still a lot hanging around.

I am chicken-wiring the fence because it’s gappy. I hate these gappy fences.

This is the lower level of chicken-wiring. There will be another level to cover the top part of the fence.

Must… get… The Husband… into garden… 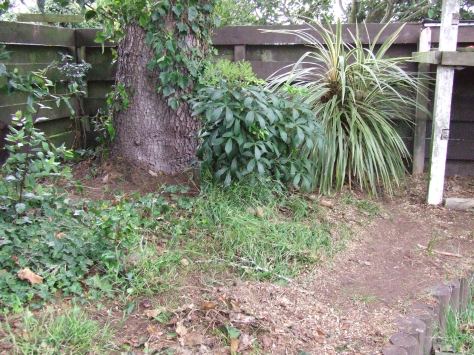 The smaller shrubs here are to stay. The young Karo is on the left behind the cedar tree.

I have also spent a lot of time raking up all the pinecone scales and cedar needles from the second chicken pen area. The Little Fulla has been helping, which mostly entails wheelbarrow rides, stopping him from putting all manner of things in his mouth, stopping him from climbing up the fort ladder, regular snuggles and stopping him from putting more things in his mouth. The purpose of all this raking is to get the sharp pinecone scales out of the future chicken area to minimise injury and potential subsequent infection to the chickens’ feet. It is also making things look a lot more tidy. Another great side effect is that I have gained barrow-loads of mulch to put onto the Plum Tree Garden. This is making the garden look good and helping to suppress the weeds. Re-purposing for the win! 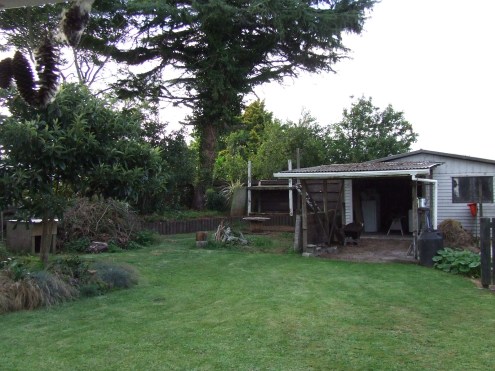 The look of the backyard is improving with the pruning of the cedar tree and the clearing of the second chicken pen area.

The low fence around the some-time-in-the-vague-past sandpit has been demoed and things have been raked.

A lot has been done but there’s still a lot to do. I am currently focusing on cutting back the re-growth of the bay ‘tree’ on the left and clearing the ivy around it so I can chicken-wire the fence behind it. The Husband’s chainsawing pile remains in the foreground…

I haven’t been much of a mulch afficionado in the past, basically because I wouldn’t spend money on mulch. I knew it was good, but it was just an extra expense, however, my eyes have been opened to the great benefits of mulch. Ok, so I’m thinking about my free mulch, but still… The pinecone/pine needle/sticks mulch is really helping to keep the weeds down, which means: a) I don’t have to spend so much time weeding or b) I don’t have to spend time and money with a side of guilty feelings spraying the weeds. And less weeds in one garden bed means less weeds to spread to other parts of the garden. Another free mulch, the used chicken bedding of wood shavings and poop, is helping to suppress the weeds in the Herb Garden and elsewhere, albeit not quite as effectively. Both these mulches are also helping to retain water, which has been hard to come by these last few months. In the Vege Garden, I was surprised to see the vast difference that mulch can make in water retention. Since the potatoes were harvested from The Corner Bed, I have been piling used chicken wood shavings and hay on top of it, and when I went to plant some brassicas in there, the soil underneath was still moist, even though it hadn’t been watered for quite a while. In contrast, The Long Bed opposite it was very dry and had to be watered. Yes please, I am getting on the mulch train. Especially if it’s a free ride. But I might even pay for a ride to Mulchtown.