The chicks are growing by the day and they are one week old now. I am enjoying the fact that I only have two to manage and handle. They are like chalk and cheese at the moment. The Lydia chick is like a little nutcase, but are we really surprised? When I try to catch it it runs around peeping like mad and when I do catch it it struggles and peeps like mad. Lydia has turned out pretty well after a lot of handling though, so there’s hope it might calm down. I am calling it Junior at the moment, since it’s Lydia Junior. Hopefully in the fullest female sense of that name… As I guessed, it is going to be a blue. Yay! The purebred chick, aka PB, is the friendliest chick I’ve hatched to date. While it isn’t super keen to be caught, it doesn’t have a fit and settles down in my hands quite quickly. Even more surprisingly, when I then put my hand down to the ground, PB sometimes just stands there on my hand, looking around. What’s up with that? Why isn’t it running away from me? Oh, that little blue chick has got my heart already. 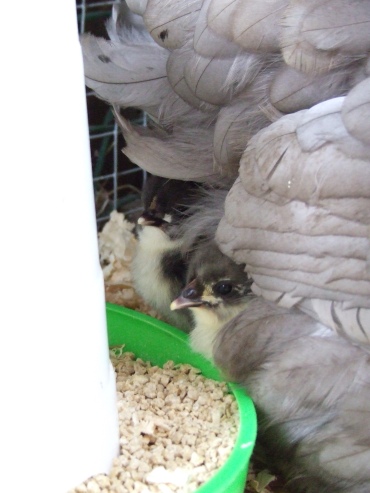 The chicks are curious.

PB (left) is more chilled out and adventurous, while Junior (right) is a scaredy cat and stays very close to Frodo. 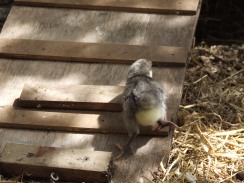 PB discovers the ramp by accident. 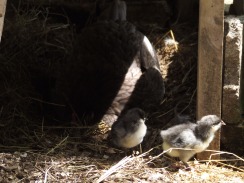 The chicks hang around while Frodo has a dust bath. 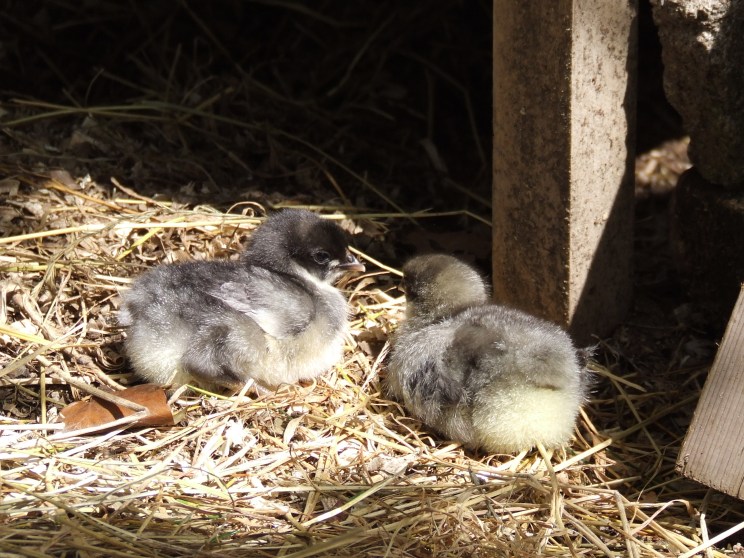 “How long does this bath thing take?”

With new young cats around that aren’t used to chickens, I am being more cautious this time, which is easier with a small number of chicks. Most of the time, Frodo and the chicks are still in the big cage in front of the woodshed and once or twice a day, while I’m working nearby, I let them out so Frodo can have a dustbath and slowly teach them about the world. She usually leads them back to the cage after a while when there are too many other big, curious chickens hanging around or because the weather has been decidedly wet.

The flock is coping well with the new additions so far. All three older hens have been behaving themselves this time. They are more interested in sneaking into the big cage where the super special secret food source is, led by Mr Bingley. I have to make sure the girls don’t go in there and eat it, since it’s got a coccidiostat in it, with a withdrawal period of 2 weeks before consuming eggs. The three younger girls have been exceedingly curious about the wee chicks though, and are learning the hard way that Frodo will chase and peck them when they get too close.

And now, shall we play a round of Hen or Roo? It’s early days but we might as well start having some fun now. Here are some good photos of the chicks. See if you can figure out what they’re going to be. The answers may be a long time coming so no guess is a silly guess!

PB – the purebred Australorp chick from a breeder. 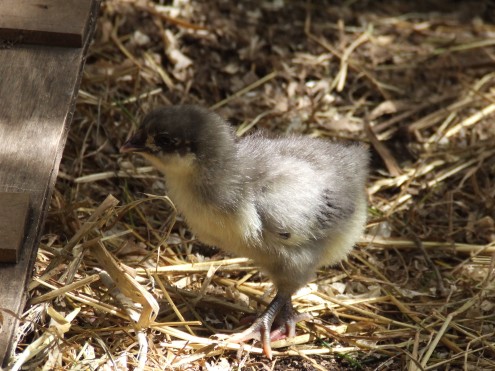 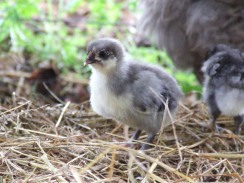 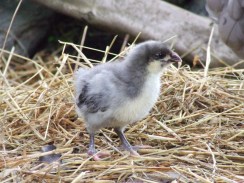 My first guesses are… PB: roo and Junior: hen. Time will tell!

One thought on “The Chicks go Exploring”