The chicken changes continue here and I know people are curious to know who has and hasn’t made the cut. A month ago I had six hens laying and now I’m down to three laying. Fortunately, these three are all still laying, despite the fact that it is winter. Frodo is up to 15 days laying in a row, so is due to go broody at any time. Kitty has only missed one egg in the last 16 days, although she briefly tried out broodiness yesterday, and Lizzie has settled into a weirdly repetitive pattern of laying for two days then missing a day, but her eggs are large or even jumbo sized with huge yolks. Georgiana still hasn’t started laying yet and probably won’t until late winter or early spring, so I don’t yet know what her capabilities are. On the weekend, two chickens found a lovely new home: Mary and one of the new black Orpington pullets. There are two more I have been trying to sell: the other Orpington and Mr Bingley. Yes.

Farewell, Mary, thanks for the eggs and for turning into a good hen.

Farewell, Orpington #1, you were my soft, pretty pullet for but a little while.

It has been very difficult trying to decide who to keep and who to sell to get my numbers and costs down. I had to make a document with photos of all my chickens to help me decide. I knew that Mr Bingley was going to have to move on sooner or later since I was determined to make a move on breeding purebred Australorps, but decided to bite the bullet since I had a rising food bill and a nice young cockerel coming along. Well, I thought I did. This is where it got complicated! I had a sudden realisation that PB was not a sweet-natured, slow-maturing cockerel but was turning into a large, huge-footed, easy-to-handle hen. Either that or PB is going to be some sort of hooster, which doesn’t bear thinking about. I swear she tried to tid-bit me one day! While I had wanted her to be a him so I could breed some purebreds in spring (or when ‘he’ matured), it is not so bad because a) it is nice to add a sweet purebred hen to my collection and b) Mr Bingley is probably allowed to stick around for longer. I guess I’ve learnt not to count my cockerels before they crow. My breeding plans are now to acquire some fertile Australorp eggs whenever some become available in order to hatch a cockerel. Option 2 is to buy one if a good one becomes available but I would much rather hatch and raise one myself, especially if I have a few to pick from.

And what of the new Wyandottes? Well, goodness, they are too precious. I feel a bit sorry that Mary lost out to some newbies, as she was a good, healthy hen. She was my only daughter of the late Legolas, but she was a lot more shy than Legolas and didn’t have the outstanding personality that I had hoped for. It was a lot to ask trying to get that personality out of a single offspring, and being the most mixed-breed of my chickens, Mary just had the least pull in light of my future breeding plans. The Wyandottes, however, have personalities that are right on-par with Legolas. They are friendly and so easy to hold, which, combined with their pretty colours, ensured them a spot on the ‘Keeping’ list. With that, I am giving them names: the silver laced girl is Lorelai and the gold laced girl is Sookie (pronounced SOO-kee for the uninitiated).

The Wyandottes and the remaining Orpington have been integrated into the main flock. I know it is dangerous to my selling intentions to have the Orpington in with the others but I couldn’t leave her in a pen all by herself. The integration went even better than I expected. After a few days of being in pens alongside each other I took the two Wyandottes into the run where the coop is, while the others were kept occupied out in the pen with kale to nibble and logs and cable reels that had been moved to reveal fresh digging ground and bugs. The Wyandottes got a bit of time to explore and find where the food and water vessels were while I stayed with them. Then Mr Bingley showed up. He made kind noises towards them and showed them how to scratch around a bit before one of his hens called him back with needy noises. The gold-laced Wyandotte had googly eyes for Mr Bingley.

Then all the others came around into the run and everyone met each other in a surprisingly non-dramatic way. Well, I suppose Lydia wasn’t there… They just kind of stood around for a while, then the sprightly wee silver-laced Wyandotte took a crack at Frodo, the now 2IC hen. She wasn’t too phased, even when the Wyandotte jumped on her back, and calmly put her in her place. Kitty, 3IC, pecked at the Wyandottes a couple of times and I poked her back to discourage her. After the older chickens started to dissipate without much eventfulness, 13-week-old PB had a crack at the Wyandottes. Her biggest tussle was with the silver-laced girl, which is to be expected, seeing as PB was at the bottom of the pecking order and the silver-laced girl has a dominant nature. Nothing got too heated though and after sitting out in the pen for a while watching the older chickens carry on as usual and knowing that Mr Bingley was there to keep everyone in line, I left them to it. The Orpington joined the flock later in the afternoon after her buddy left. She is almost as big as Georgiana and was more interested in foraging around, so her introduction was even less eventful. She has quite a dominant nature too so it will be interesting to watch what happens in the coming days. The integration was a good distraction, especially for Mr Bingley, from the fact that Mary had disappeared off with her new family.

Mr Bingley brings his posse around and the introductions begin. 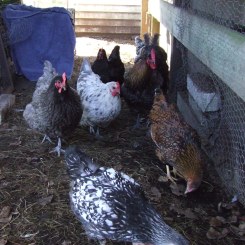 After a few minutes the older hens are more interested in eating and drinking.

As chicken bed time started to approach I kept an eye on the chickens out the window. I knew I would have to assist the newbies with where to go. As the others milled around the coop, filling their bellies and starting the entrance proceedings, the three newbies were out pacing the fence trying to get into their old, adjacent pen. When I went in there the Wyandottes came up to me and just stood there in front of me waiting for me to scoop them up. Aw, bless their little hearts! The only chicken who has done that before was little Half Pie, the peck-injury chick from my first hatch, during his reintegration. I placed the Wyandottes in the coop then went and caught the Orpington, who thought she could find her own way home, thank you very much. The second night the newbies didn’t quite make it into the coop past the big scary chickens again. I found the three of them trying to find a place to settle under the woodshed shelter, managed to scoop up all three at once and put them through the coop door. Once they are in there they’re alright, it’s the getting in there in the right order without offending anyone that’s the tricky part. They’re ‘supposed’ to go in first, before PB, being the lowest in the pecking order. They’ll get it eventually.

Thus, we are back to all the chickens in one pen. I have one Orpington left to sell, before I change my mind, and a Mr Bingley, who will hopefully be sticking around for a while unless a nice home is found for him in the interim. The only thing I’m unsure about is whether Lorelai is actually a girl or a boy. Her curling tail feathers, long legs and slowness to feather up at the back end have me a bit nervous, as I really like her, but I’ll just have to wait and see.