I thought winter was supposed to be the quiet season. I had great plans of getting small bits and pieces done, you know, the things you shove to the side when the weather is good: cleaning all the windows, building a spice shelf, doing some fun crafty things… Most of that stuff went out the window. Including finishing cleaning the windows. But, despite the wettest, soggiest, driving-me-insane-est winter I have known, we did actually get a lot done. Here are some of the main achievements that occurred during winter:

Take that, rain! I certainly did not sit inside twiddling my thumbs.

The last week or so I have been kept busy with preparations for a small boy’s birthday, housework, tidying up outside, gardening when the sun deigns to show his face and some training for a temporary job. So much for the provident sun; he ran off again leaving us with his soggy brother. We are being teased with one or two nice or half-decent days followed by many more bouts of rain, soggy ground and pools of water. I have also continued the egg thief investigation, which I thought was almost at a close, but now I’m not so sure. An investigation that ends with “I’m not sure” is not a very good one, so the full report will have to wait until I have a satisfactory answer.

The Little Fulla has just turned two. How did that happen?! We had a family party for him on the weekend with a bit of a car theme – as much as I could manage in a short space of time. He had a great time opening and playing with gifts and eating yummy food. We love him more and more each day and enjoy his personality and funny antics. He’s a winner.

I threw together some decorative things for a special small boy’s 2nd birthday. I even managed to cut his hair. A mullet is no hairdo for a birthday boy.

Ok, I may have gotten a little carried away with the size of the cake, but at least we have cake in the freezer now. 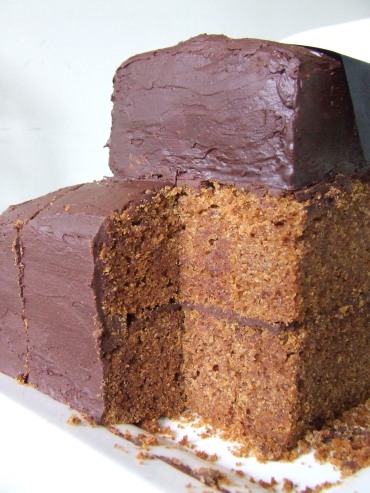 It was a gingernut cake with chocolate frosting. All dairy-free and gluten-free.

I am learning to make the most of the nice or half-decent days by getting gardening or outside tasks done on them and saving outings for the rainy days. If it’s going to be raining all day we might as well be driving and doing the shopping. The Little Fulla has been good at helping me with the weeding. We cleared some space in the compost area to put the two potato barrels, then used compost from the chicken compost bin to partially fill them and cover the early Lisetta seed potatoes. Recycled weeds at their best. We also planted red spring onions and transplanted some more meadowfoam  (Limnanthes douglasii) around the vege garden. These red spring onions or bunching onions, are a compromise on not re-sowing my full-sized red onions. I only ended up with five red onion seedlings to plant. Oops! Well, seven, but The Little Fulla took out two of ’em.

Look at the sun! We cleared away enough weeds to site the potato barrels here: The blue one on the far left and the black one on the far right. The lidded blue bin contains compost tea.

I had 12 Lisetta seed potatoes so I planted four in the smaller blue barrel and eight in the black one. 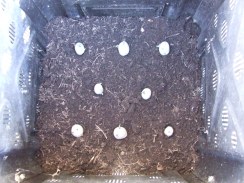 I wouldn’t normally put this many seed potatoes in one potato barrel, but I am pushed for space to fit all my other ‘taters in the garden.

The potato barrels will a be a bit more out of the way in the compost area this year.

I also learned that I cannot eat sheep’s milk products. I made a lovely quiche for the party with bacon, silverbeet and sheep’s feta cheese, which I used as an experiment to see if I could handle sheep’s cheese. The night after the party I threw up because I failed to take a dairy enzyme pill when I noticed symptoms of intolerance before I went to bed, because I was stubbornly clinging to the belief that I would be able to have sheep’s milk products. Sigh. No dairy for Twiglet; cow, goat or sheep. And I was just starting to ponder whether we could keep some milking sheep one day…

I’m going to be working a bit over the next few weeks but there is still a lot to be done. Spring has sprung and there are more seeds to be sown, things to be planted and weeds to destroy. And with more than one chicken standing on trial, as well as other non-feathered suspects, who knows what will happen next?