Things have been plodding along slowly here while I’ve been recovering, but I’m doing a lot better now. Naturally, at least one chicken had to come up with some sort of illness too. Annie developed bumblefoot , then Pickle got in a pickle. She was looking sorry for herself and when she turned around I discovered she had pus in one of her eyes. Yes, it was gross. Inspection revealed no other noticeable symptoms, so I guessed it would be a scratch to the eye, or a foreign body, that had become infected. Another option was a worm in the eye but there was no sign of one and I had just started the chickens’ regular worming in any case.

I was worried about Pickle because I knew antibiotics might be required and I was not willing to spend money on antibiotics for an unproven pullet. I used cotton buds dipped in Optrex eye drops to swab out the pus. It is not an easy one person job. Pickle pretty much thought she was going to die and struggled and screeched accordingly. Chicken pus gets firm, and globs of it had to be massaged up and out from the bottom of her eye. Too much information? Well, it might be helpful to someone. Then I swabbed some Vetericyn around her eye, which is safe for use around faces and has antibacterial and antifungal properties. The next day I repeated this twice until I got the last big glob of pus out. That seemed to do it, and her eye was looking better the next morning. I continued to dab Vetericyn around her eye twice a day for a few days until her eye was looking much better and she was feeling much better, evidenced by her attempts to escape and some surprisingly valiant efforts at crowing. I thought Darrington the rooster had relapsed into teenagerhood for a few minutes.

Young Darrington’s services at breaking up fights were put to the test as reintroduced girls caused ruckuses in the pecking order. Darrington has done very well at keeping those girls in line. However, he is proving difficult to handle. He has not inherited his father’s most excellent, compliant nature. I am working with him at present. Most of the eggs are fertile now and I am collecting some for hatching. Frodo has been broody several times. Paris, of all hens, decided to go broody too. Although she’s the bossy top hen, she was a weirdly quiet broody so I wasn’t sure what to think at first. But when she hunkered down in a nestbox one night, all low and frozen-like, she had to have a short stay in the cage. And it’s currently Rory’s turn. Rory is very determined about it so I’m wondering if I should just give her some eggs to hatch. There’s something in the air!

The two chicks are doing very well and moved out into the Big Cage in the garage with their heatplate. They have been outside a little bit with supervision from The Little Fulla and I. The small Feijoa Pen behind the main coop is quite useful for this. It is nice having such friendly chicks. They climb on me when they’re scared or just because. It’s cute.

These guys are too much fun.

There isn’t a whole lot to report about the Vege Garden yet, but there are seedlings everywhere! At the times when I wasn’t feeling too bad I sowed or potted up a few things at a time, bit by bit, then at the times I wasn’t feeling so great I looked upon my swathes of vegetable babies and wondered what on earth I was doing. But now I’m glad I looked to the future of the Vege Garden. 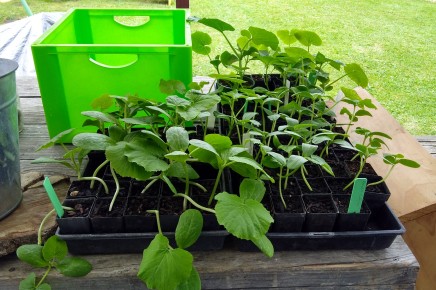 The cucurbit corner. Well, one of them. 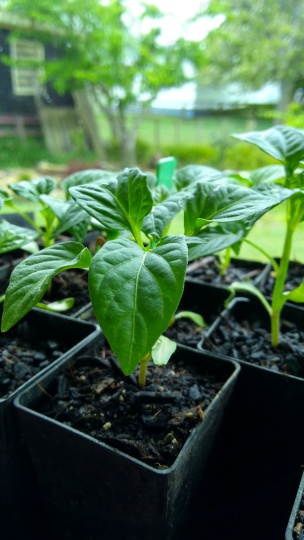 The mass of cucurbits that I germinated in the hot water cupboard have been a lot of work. They require daily checking and potting up before the roots get too long. Ideally… Many seeds turned into batches of little pots all over the windowsills and table and then on the deck along with the other seedlings. I am excited to be able to grow some things I haven’t grown before like spaghetti squash and honeydew melons. 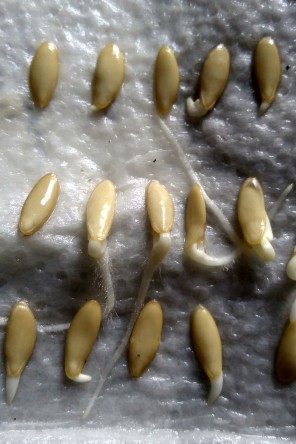 Pumpkin seeds germinating. There is always variation in germination rate. Hence, lots of checking is required.

Something went quite wrong with my giant pumpkin seed saving last season. I forgot to save seeds from the biggest pumpkin, the one that collapsed before the carnival, until it was a bit of a stinky mess and I was left with some stinky seeds. Then I forgot to save seeds from any of the other giant pumpkins. Argh! Thus, I have two precious giant pumpkin seedlings that germinated from the biggest pumpkin. There are some pumpkin seedlings popping up in the Cedar Pen, but I don’t yet know if they’re giant pumpkins or Small Sugar, as compromised specimens of both we’re thrown into the chicken pen.

I don’t know if this giant pumpkin seedling realises how many hopes and dreams it holds.

The main vegetable casualty of my sickness was the tomatoes. Some of the early seedlings didn’t make it, so I might have just enough Black Krims and Amish Pastes for the garden and none extra to sell. The new Broad Ripple Yellow Currant seeds weren’t of great quality and I lost the first few seedlings. However, I have a few from a second sowing.

In the garden I’ve planted six lettuces, some oriental mesclun and one Golden Roma tomato.  That is the definition of slow. I assembled a frame for the climbing beans and sowed green Yard Long Runner beans on one side and Yard Long Red Noodle in the other. And I got The Husband to help shovel compost and wood shavings to get the second bed of potatoes, the Summer Delight, planted. The Agria potatoes in the first bed are all up and growing nicely.

It’s been great to have veges available to use recently despite not being able to do much. I am thankful for the broccoli, parsnips, spinach, silverbeet, etc. that has kept us with things to use. Now it is time to make space for the rest of the tomatoes, the capsicums, the cucumbers, the pumpkins, the squashes and the melons. Tomato frame assembly is underway and I need to figure out more places outside of the raised beds where I can shove some pumpkins and tomatoes.

In craft news, I am having a break from knitting baby hats for people and am knitting a dishcloth. Sure, that doesn’t sound exciting, but it has trees on it. I am also in the throes of gleefully making Christmas decorations, which I intend to sell.

In random news, I found a rather large rat lying on the Vege Garden path, which wasn’t dead but certainly wasn’t well. I had to whack it on the head, but fortunately just before the neighbour walked over to say hi. And we’ll stop there, or I will prattle on forever, and I have a market to prepare for!