Guys, we have had rain, glorious rain! We have been weather forecast website groupies lately. The tanks were getting low and the rain kept frustratingly disappearing off the forecasts. Then we heard that a cyclone was heading our way and we were like, “Bring on the cyclone!” Ok, I know that sounds crazy in some contexts but it was only bringing rain by the time it got here. The February rainfall total was at 0.2mm before this and the January total was much less than normal too. We are very thankful.

Here’s some of what we’ve been up to lately, aside from dealing with chicken politics.

I managed to dig out the bed of Summer Delight potatoes before the rain came. Some of the plants were looking a bit sorry with blight but most of the potatoes themselves were ok. The Agria potatoes gave us a higher yield than the Summer Delight and were ready sooner, meaning space was freed up in the garden for other things. I have been deciding whether to grow only one bed of Agria next year or no potatoes at all. Although fresh homegrown potatoes are great, I’m leaning towards no potatoes. They are cheaper to buy than many other vegetables and always available, and I’m not a fan of having to dig them up all by myself. Our current space would be better used in growing more tomatoes or something else, as we can use tomatoes to make heaps of things that can be stored for later and we didn’t get enough tomato plants in this season. I can always do with more space for the orange swathe as well – pumpkins and squashes.

A blighty potato patch is not desirable.

Summer Delight potatoes. The one on the left has a patch of blight. Fortunately, most of the potatoes looked fine, like the one on the right.

We are harvesting Tollis Sweet Red capsicums now. They are really something. The plants have lots of fruit and they have a really good flavour, much more flavoursome than the common, blocky bell peppers. I harvested our first bean, a yard long red noodle, which measured in at 59cm. 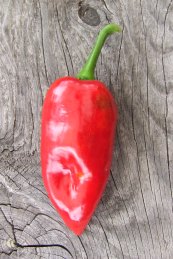 Preserving is under way as more produce ripens. More chopped tomatoes have gone into the freezer. The strawberries have increased production again so they’re getting chopped and frozen too. The dehydrator made its first appearance of the year to dry some cayenne chillies. I put them in a jar and when the whole lot have been dried we’ll grind them up into cayenne pepper. We amassed enough gherkin cucumbers to do some pickling, so now we have a small stock of yummy gherkins to eat throughout the year.

The biggest Amish Paste so far this season – 255g. I saved seeds from it. 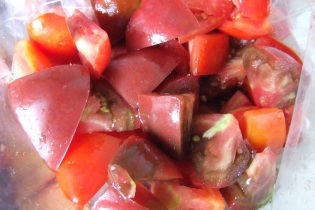 Chopped tomatoes go into the freezer. 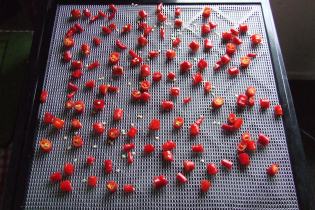 Chopped cayenne chillies about to go into the dehydrator.

Using some of our white cocktail onions for pickling the gherkins.

The corn has reached heights taller than me now and is flowering. Go corn, go.

I installed wire mesh along the carport side of the Raspberry Bed. I opted for a mesh with 10cm x 10cm squares so we can fit a hand through to pick berries, but chickens won’t be able to get through if they are free-ranging. I’m holding off on installing the mesh along the lower Blueberry Bed beside it until we’ve built the second blueberry bed beside that. Then I can run the mesh along the whole lower length. I bought an ‘Aspiring’ raspberry, which is an autumn or dual-bearing raspberry. It was on special and I chose one that had several canes coming up so I could split it in half to make two. Now we have four raspberry plants all planted. It’s not the usual time of year for planting them, but I’m trying to reduce the amount of potted plants that need watering. I still need to figure out support for the raspberry bushes on the front and side.

While it was dry and the citrus trees were taking a break from fruitfulness, I pruned the mature lemon and tangerine tree. They needed a trim on the sides and some growth removed from the centers to let more light in. Then I looked up into the great mass of the feijoa tree. It towered above me, reaching out towards the other fruit trees and in desperate need of some discipline. I cut off a few branches, but I really need to get up high to do some serious pruning.

It was time to move the chickens back into the Cedar Pen so I did a clean-up first. I pulled out all the nightshade weeds I could find, as the berries are toxic. A few sunflowers had popped up in the pen, apparently from seeds fed to the chickens. One was getting quite tall so I staked it. I’m sad to say the slugs, snails or wind got to all our others in the end. They just aren’t meant to be grown in the Maple Tree Garden. This is a good consolation.

I tidied up the bay tree and pruned the young apricot tree and peach tree in there. I had already pruned them a small amount earlier in summer but the apricot tree in particular is growing like bonkers and the long sweeping branches that were hanging down low had to be tamed.

I also pruned the young Cox’s Orange Pippin apple tree outside our living room window. That has grown like bonkers too, in more of an upwards manner. I will be doing more fruit tree pruning when things dry out. Summer pruning is more recommended here than winter pruning for some fruit trees, as the wetness of winter carries a high risk of disease getting in.

Rory’s chicks were instant fans of the ladder.

Paris and her chicks were instant fans of the compost bins.

Lastly, I found just the right craft desk for myself to go in the spare room. It is old and full of character, having originally come from Dunedin. It is missing one drawer, but we can figure something out for that. I am now stocking up the drawers with all manner of crafty things that have been stored all over the place. We put up the spare single bed we had opposite the desk so some things can be stored under it. I still have the less exciting task of dealing with the pile of stuff on one side of the room that needs to be sold or given away. 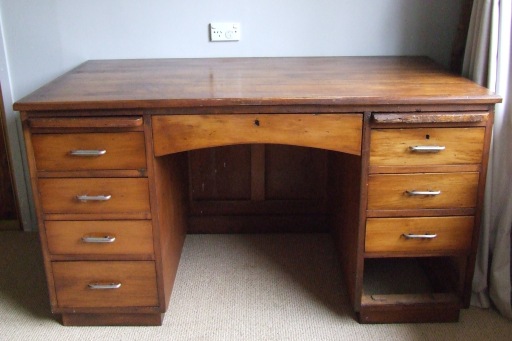 I am very excited about my new, old craft desk. 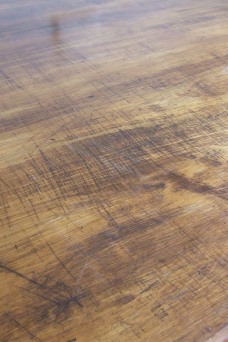 This desk is full of character from many years past.

5 thoughts on “In Which The Long-awaited Rain Arrives”