We are awaiting feather babies. Frodo took a little longer than usual to go full broody, but she is now sitting on eggs. I set up the Corner Coop for her and tested her out with three of Paris’ eggs from the first incubator batch. It seems I moved her a little early as she wasn’t quite sitting tight and got a bit too interested in the change of ground outside, so we waited until she was ready. Now she’s sitting on the rest of the first batch of eggs that were in the incubator, in lockdown. Hatch day, Day 21, is on Sunday. I couldn’t bring myself to throw the other Paris eggs away part-way through development, so I will just have to be watching so I can mark the crossbred Paris chicks. The last lot were easy enough to tell apart as they grew anyway. Frodo is sitting on 13 eggs. Two of Tiggywinkle’s eggs I wasn’t sure about earlier were duds and one of Frodo’s stopped growing earlier on.

We have planted some seedlings in the Vege Garden before it gets too cold: picking celery, broccoli, cauliflower, cabbage and lettuce. It’s not like we need any more lettuce, but there were still caterpillar-damaged seedlings sitting around and if you’ve got the space, you might as well bung them in there, right? We’re going to be swimming in lettuces soon. The Little Fulla also helped me plant the big elephant garlic bulbs. They didn’t seem to be much affected by the rust that plagues common garlic here, but I’m trying out getting them in earlier to see if they will get even bigger. That leaves just the leek and cocktail onion seedlings to plant when they’re a little bigger. 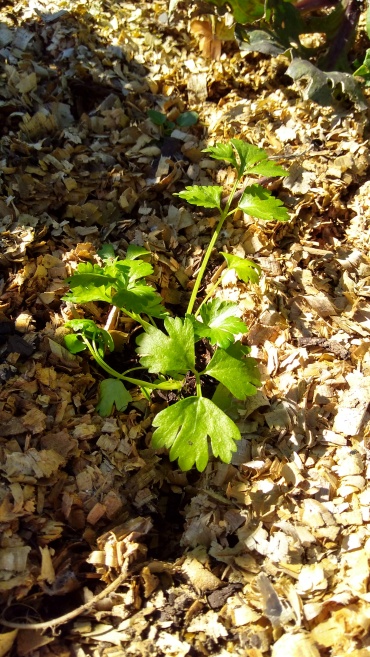 Picking celery is a great longer term celery because you can pick the stems as you need them. 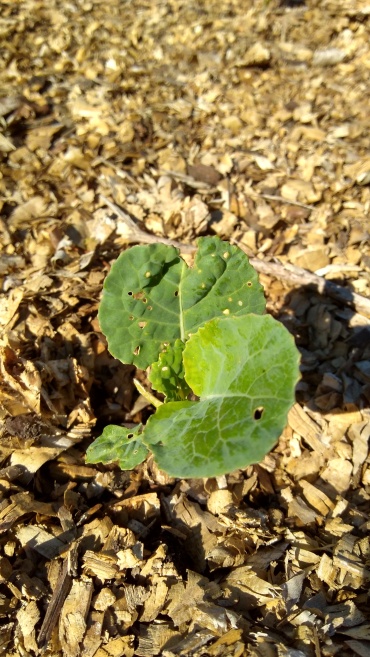 A baby cabbage that will hopefully overcome its carterpillar-chomped start to life.

Here’s a little something I did with a spaghetti squash for dinner with pieces of chicken, capsicum, onion and herbs. This one weighed 2.2kg so it was pretty big and we have the other half left for dinner tonight. It’s a great way of using homegrown produce.

We are back on track with the branch mulching, mostly thanks to The Husband. I’m trying to save a pile of mulch to put in the Plant Alcove area, but a small child keeps riding over it with his bike. I really, really like having a mulcher. We can never have enough mulch.

The chickens aren’t impressed that we took their pruning pile away, especially Jemima, who had started laying in it. She has shown no inclination to lay in any of the nestboxes. Since we took her pile away, she’s been laying in the corner of the coop beside the nestboxes. Well, it’s better than laying outside. As long as she doesn’t run away and find a sandy whiskered gentleman…