We have chicks! Frodo hatched 10 out of the 13 eggs she was sitting on. The first ones hatched overnight on Sunday. Of the three that didn’t hatch, two (one Frodo one and one Tiggywinkle one) had gone bad earlier on (it’s hard to tell with darker shells sometimes) and one (a Frodo one) just didn’t make it out for some reason, probably because it was slower and Frodo had started crouching up trying to feed the older chicks and wasn’t covering it properly.

Sadly, we did have one death. I found a blue chick dead beside Frodo on Tuesday morning, still wet after hatching. It looked like it had a hernia: there was blood at its ‘tummy button’ site and a piece of egg shell stuck to it. Maybe it got jostled around too much, I don’t know. It happened overnight so there wasn’t anything I could have done. Frodo made a ‘something’s wrong’ growling noise until I went around to the other side of the coop and found it beside her. Poor thing. I’m always more sad when a blue chick dies. However, the others all seem to be doing well and are starting to get rather active. 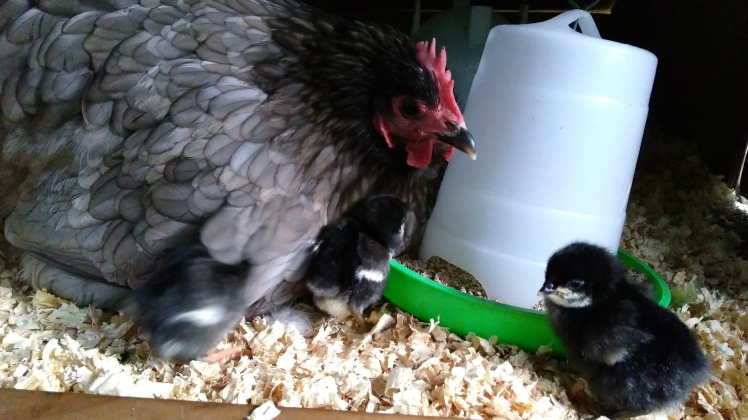 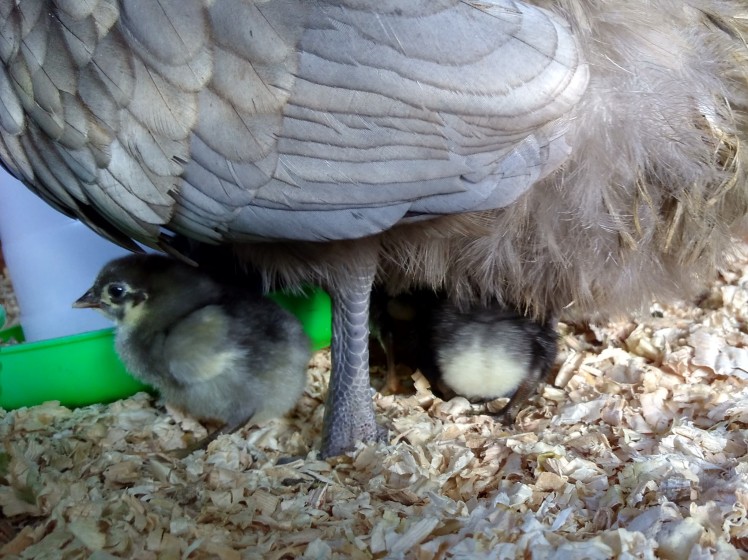 Now we come to some parental logic problems. You know, it’s like one of those logic scenarios that you have to figure out, given only certain amounts of information. Here’s what I know:

10 eggs hatched, 1 blue chick died. There is one other blue chick and the other 8 are black.

I was not very successful in keeping track of which chicks were from which mothers, seeing as a lot of them hatched at night time. I’m not sure whose the dead chick was, except that I’m pretty sure it was either Paris’ or Frodo’s. At least one of the Tiggywinkle chicks is black. Two blue chicks hatched and at least one of them had to have come from a black mother. It is not possible for Darrington to be the father of a blue chick from a black mother, because he is black. Black x black = all black chicks. Do you know what that means? Thomas, blue Thomas, culled Thomas, was busier than I thought. He has fathered at least one of the chicks and quite possibly more. Oh, Thomas is having the last crow now!

In a few months time I may well be able to tell who fathered the chicks from their appearance. At least, I could probably tell the differences between Darrington chicks and Thomas chicks. But what about Andrew? I know he’s getting down to business now but I don’t know about back then. It is less likely that I would be able to tell the difference between Darrington chicks and Andrew chicks. As for the mothers, hopefully I will be able to figure that out for sure down the track too. At least some of the crossbred Paris chicks are distinguishable by their rose combs. 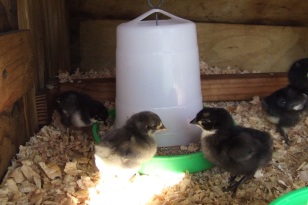 The one with the orange spot is a Paris chick. The blue one is, ummm…. I’ll tell you in a couple of months. 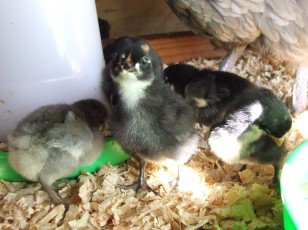 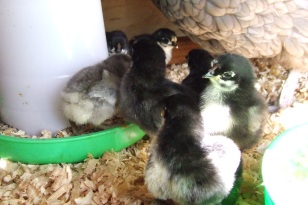 The chick facing the camera is a Paris chick. Note the rose comb, which is flat and of a brownish hue. There’s another one with a rose comb in the back left corner.

This one is quite likely one of the purebred Australorps.

Confused? Join the club. This is what I get for hatching Paris eggs and getting in ‘one’ more round before winter. But the Paris eggs are just so fertile and the chicks thrive; they’re good insurance against uncertainty or problems with other eggs, in this case, eggs from young layers and a Frodo between bouts of broodiness. Sometimes Frodo sits on an egg she’s hatched for too long while she’s in semi-broody mode if I don’t keep checking her. We could just say I wanted to create a more challenging game than the game of Hen or Roo? It’s called: Who Your Daddy? And Your Mummy? And Are You a Hen or Roo? That seems to have a pretty catchy ring to it. I’m sure it’ll catch on. You guys can have fun playing this game with me.

The next round of eggs in the incubator are going into lockdown tomorrow. There are 9 of them at present: 4 from Paris, 3 from Tiggywinkle, 1 from Frodo and 1 from Jemima. This is the first one of Jemima’s eggs to be fertile. I hope it’s still going strong when I candle them at lockdown time. I’ll be able to keep a better eye on the hatching order this time, by watching through the incubator windows. At least, that’s what I’m telling myself.

One thought on “Who’s Your Daddy?”