We have been enjoying unusually cool weather here. Or at least I have. The daily highs have been around 21-22degC, which is my ideal summer weather. People at the beach might not be so impressed but it’s been so great for getting things done outside.

I had some big weeding sessions after Christmas, mainly in the ornamental garden beds. They look heaps better than they did before, although I haven’t finished with the weeds yet. I have also planted out some native plants. I will have to take photos of them to put up here soon. The Little Fulla had his own idea of ‘weeding’ his worksite beside the deck…

I also got stuck into clearing work along the east paddock fence and then fencing with wire netting to the end of the roll that I started installing earlier. There was ivy (my rash-causing nemesis) to clear, which did not go well for my arms thanks to not buttoning the cuffs on my long-sleeved shirt. Lesson learned. I also had to cut through branches that were too close to the fence on the fig tree and the red-flowered camellia tree. I found a privet sapling that had shot up high behind the camellia. Tree privet (Ligustrum lucidum) is one of the worst weeds in New Zealand. I have found some shooting up behind the white sasanqua camellia further down this fence as well. The Husband will need to chainsaw this one. They will NOT be allowed to live in my garden. There’s a reason why The Little Fulla calls this part of the garden ‘The Forest’. There’s a lot of crazy, untamed growth going on in there. I’m not against crazy forest growth, but not when it’s horrible weeds. Or excessive camellias. I have some more chainsawing work for The Husband to do in there. 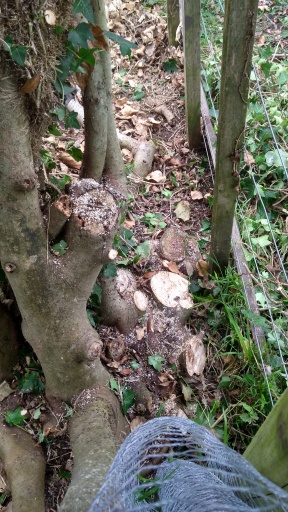 The trees had gotten a little too close to the fence. 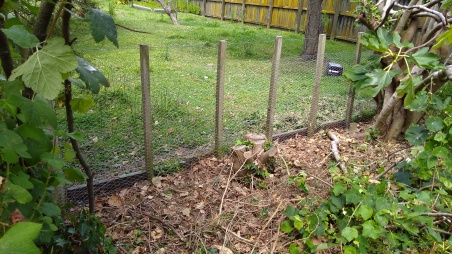 Fencing success. At least for this section. The stump is from the ivy-smothered camellia that The Husband cut down recently.

‘The Forest’ is getting attention. And we’re making more mulching piles…

The time came to tackle the undesirable Wee Bee Rampant (Wee Bee Little pumpkin x spaghetti squash) hybrids growing in the Veggie Garden. They were all over the place and I thought there was only one round-pumpkin-producing plant in there. As I began to cut off lengths of vine with the elongated fruits attached to them, I was able to start tracing them back to the main stem. It turned out there were only two plants out of six that were growing rampantly and producing fast-growing, elongated fruit. With the crazies out of the way I was left with four plants with a much more compact, bushy ‘Wee Bee Little’-like habit and rounded pumpkins. I have left them for now, although the size to which they are growing and the continued presence of dark green on them suggests that they probably still have some cross-pollination issues from the previous season, with the larger Small Sugar pumpkins. I feel like the pumpkins are mocking me. But they will not have the last laugh.

The smallest Wee Bee Rampant squashes went to the chickens and the most ripe few are on the outdoor table, hopefully curing as potential pumpkin racers, although I’m not at all confident they’ll last the three months until The Great Pumpkin Carnival. The other green squashes were marched into the kitchen. I tried grating one to see if I could use it like zucchini; a kind of summer squash. It actually wasn’t bad. I cut it into quarters, cut off the ends, scraped out the soft, seedy middle with a spoon then grated all the rest of the flesh and skin and put it into a bag for the freezer. One fruit made a whole lot of grated squash. I excitedly showed The Husband the large bag of grated squash and announced, “Guess what weeee’ll be eating for the next few months!” The look on his face was of confusion mixed with terror. The Little Fulla was already chomping down on some pieces of fresh squash so I had to give The Husband a little bit to try so he wasn’t so scared. Now we have a bunch of bags of grated Wee Bee Rampant in the freezer. I added some to the butter chicken I was cooking a few nights ago and it was rather good. Take that, rampant hybrid! Even so, I do not wish to grow any more of it. I have my own pumpkin plans. 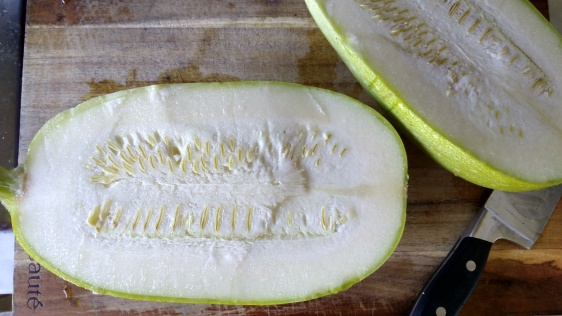 The Wee Bee Rampant hybrids are introduced to the kitchen.

One rampant squash grated and bagged, ready for the freezer.

The first chickens of the year have been butchered – Mr Pecky, the young cockerel, known for doing what his name says ever since he hatched, and his full-brother, the other black Tiggywinkle boy. This reduces the chicken load a bit with all the chicks, both Frodo’s lot and the blue/splash brooder lot, now out with the main flock, getting their food from the chick feeder box. The hatchmates of these 12-week-old cockerels that we are left with are a blue Frodo boy, who of course I am interested in, and four Frodo girls, one blue, three black. I am quite stoked to have four Frodo girls. It’s about time I got more girls than boys in a hatch!

It’s still a bit early to make many decisions about who to keep. Mr Anderson’s black sisters or half-sisters, Trinity, Morpheus and the one I’m planning to sell, who I call Link, are five months old now, so hopefully only a few weeks off laying. Once we’re getting more eggs I will start making more decisions. I am hoping to do another hatch in February, depending on when Frodo goes back to laying. She tends to have the best stretch of laying after she’s raised some chicks and satisfied her motherly urge for slightly longer than usual. And speaking of broodiness, Tiggywinkle and her daughter, Duchess, have both been semi-broody for about a week now. They’re still laying, but I have to keep getting them out of the nestboxes or they sit and sit. They haven’t gone full sit yet so there’s no point putting them in the broody breaker. Duchess was actually suprisingly nice to the brooder-raised chicks when they entered the pen. She spent some time pecking at the ground showing them how to find seeds from the hay. Then Mr Anderson joined in helping, so that was nice to see.