I am playing a game of catch-up with my garden tasks. Making up for lost time and making the most of the sunny weather before it runs away. Yes, the sun arrived! Welcome, yellow friend.

This means I finally got to spray my fruit trees and roses with copper fungicide to prevent any nasty fungal diseases and an organic oil to get the scale and mealy bug that are deviously enjoying some of my plants. I have been researching a lot about fruit trees lately, and am learning the right times of year for spraying, pruning, fertilising and so forth. I also fertilised my potted peach, plum and apple trees with a general compound fertiliser to boost all-around growth as they start to spring into life. Spring: it is almost here… How marvelous! Still on the fruit train, I filled up my large wooden planter box with a mixture of compost, potting mix and a bit of soil. Then I planted it with the three blackcurrant plants that I brought up from Christchurch. They are still wee babies, but hopefully not for much longer. They really are planted too closely in the planter, ideally they should be about 1.2m apart, but they won’t be in there forever, so I figure they’ll be ok in there until I can find a more suitable spot or move house.

Not to be ignored, the veges must have a bit of attention too. I planted out some kale plants that I grew from seed over winter: Mesculun Kale Blend from Kings Seeds. There are a few different types in there and this is the first time I’ve grown kale, so I will watch them with beady eyes. I don’t know if I’ve ever eaten kale either. It is supposed to be rather good for you. It can be used in similar ways to cabbage, but has more nutrients due to its free, well-coloured leaves as opposed to the tightly-packed, pale heads of cabbage. 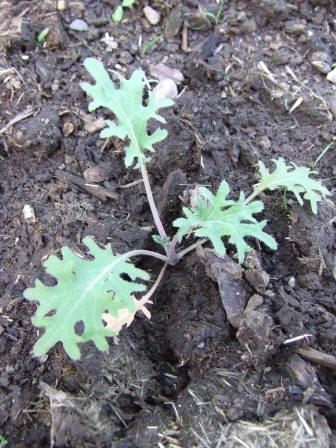 The Husband and I took a trip to Bunnings for numerous things, one of which was seed potatoes. Purchasing seed potatoes, which aren’t actually ‘seeds’, they are swollen underground stems as all potatoes are, is good practice for avoiding potato diseases. Seed potatoes are grown and selected in strictly controlled conditions and it’s generally easier to buy them than producing them yourself. August is high time for chitting potatoes before planting time. I told The Husband I was going outside to chit the potatoes. “You’re doing what?” “I’m going to chit the potatoes.” “What?” “Chitting the potatoes.” He didn’t know what I was on about but seemed to find it very amusing. I explained to him that chitting meant spreading the potatoes out on a tray and putting them in a cool, dry place out of the sunlight so they sprout stems. Then he asked, “If we put you in a cool, dark place will you sprout stems?” He was obviously getting too much amusement out of this, but at least he has learnt something. And not that I will sprout stems. The potatoes will.

In other garden news, The Husband did some much-needed mowing of the lawns today. The only problem was, he broke the handle clean off the starter cord half way through. It’s kinda hard to start the mower now…