A few nights ago as I shut the chickens away for the night I noted something with great interest. Frodo was up on the roost with Legolas and Elrond. Wow. She has been on the floor of the coop since going broody and raising her chicks, but no more! So long, babies! At six-and-a-half weeks old the feather babies were on their own, so to speak, and now sleep in a sibling pile on the floor. Frodo will still hang out near them during the day sometimes, but they are ‘grown’ and now have to forge their own paths in the world.

Here they all are at seven weeks old. They are so pretty, just like little mini chickens. Although I hit the stats right with four blues and four blacks, I am resigned to the fact that I probably have three females out of eight, two blacks and one blue. The Smoky Chick may still turn out to be a girl but it doesn’t matter, owing to his/her unfortunate colour discrepancy.

More Scrappy. Because you can never get enough of Scrappy. 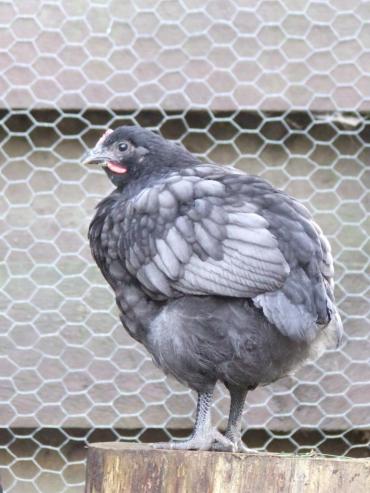