We were blessed with two days of glorious, sunny spring weather this weekend and I used them to get as much done as I could in the vege garden. I am pleased to announce that the construction of the newest vege beds is finished! The Husband has done a great job of constructing them according to my plan. The only thing that’s different is the long narrow bed along the fence wasn’t supposed to be quite as wide, as the nearest side wasn’t supposed to go right into the corner of the far bed, but the plan printed out weirdly so it was a bit hard to tell. It means there’s a little less space in the two front beds, but more space for the tomatoes and other climbing things that will be grown in the narrow bed along the fence. It is probably better for the tomatoes to have more space and the beds look better this way so I think it was a good oversight.

My next tasks on the chicken pen side of things are:

The new beds have been partially filled with compost and chicken bedding but I’ve used all the ready home compost so we’re going to have to buy in a lot more. Some of the older Long Bed still needs topping up too. If I can find some good horse poop that would help keep the cost down, but good, aged poop is hard to find around here.

You may notice that some of the paths around the vege beds look lovely instead of weed-infested. That’s because I’ve been laying down the ‘wood shavings’, which turned out to be unsuitable for the chickens, as a mulch to help suppress the weeds and make things look nice and tidy. At least for a little while. I’m feeling quite pleased about how it looks and that I’ve found a good use for it. It’s no easy task getting it out of the giant bag in the carport though. All the substrate in there is wet and has to be shoveled out and transported by the wheelbarrow load as the bag is ridiculously immovable with all the wet weight in there.

I also got the Long Bed weeded this weekend. The Little Fulla ‘helped’. He got excited about being allowed to hold the trowel and tried to dig with it all on his own. That was a proud mummy moment. He’s well on his way to becoming a gardener already. He just loves being outdoors and gets upset when we have to take him inside. While I pulled out weeds he pulled at the brassica leaves, repeatedly tried to eat spring onion flowers, watched the neighbours’ calves and sheep and tried to grab lemons off the lemon tree. And I spent half the time running after him every time he took off out of the vege garden area. I also moved the stack of materials that had accumulated along one fence to the space behind the potting shed. I was going to plant something edible down there in the future but decided I probably need it as a storage spot where things can be out of sight. I even made time to sow a few more seeds: leeks and meadowfoam (Limnanthes douglasii) for the vege garden. Doing all this was somewhat of a challenge with The Little Fulla, especially since he is only sleeping for 1 to 1 1/2 hours total during the day now (I am mourning the loss of his morning nap but he sleeps well for about 12 hours at night so I can’t complain), but it is fun getting to share the garden with him and teach him things.

The next vege garden tasks are: 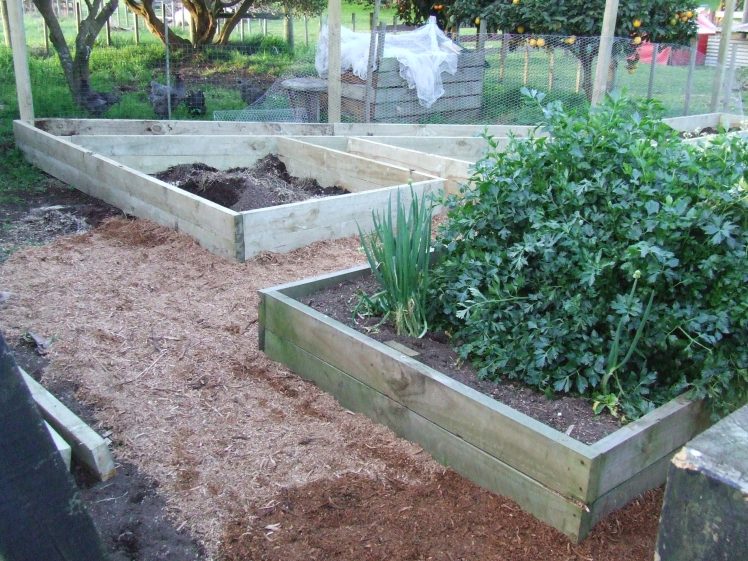 2 thoughts on “A Weekend in The Vege Garden”