I have been thinking a lot about flock management lately. Now that I know every chicken isn’t going to keel over and die from Marek’s disease or something else, I need to start making more pragmatic decisions about each chicken and their usefulness to the flock as a whole. For the size of our property and the size of our pockets I cannot have a huge flock and I cannot keep chickens who are costing more than they are worth. I am looking at each chicken and considering:

All these aspects affect how cost-effective they are and what traits they could pass on to future offspring. Yes, I am becoming a more pragmatic chicken keeper.

I am heading in the direction of having purebred Australorps, because I like them and there aren’t as many in NZ compared to some breeds. This would mean that when I raise chicks and sell them I can make more money, especially with regard to roosters. I’m not going to get rid of my mostly-Australorps though, unless they aren’t up to scratch, because I love them and I’m not that pragmatic.

Two nights ago I made a tough call. It may come as a surprise to some but not to others. I culled my first hen for non-life threatening reasons: Jane. I always considered Jane my weakest female and her personality didn’t make me particularly fond of her. She was the lagger of her hatch. She was shy, weird and hard to handle due to excessive flapping and clawing, which, unlike the others, seemed to get worse with more handling. But she wasn’t mean and she never pecked me. She was the one that had transient paralysis from Marek’s disease when she was young, which I pulled her through. She had sour crop, which I pulled her through. She had bumblefoot, which I thought I had pulled her through. She had an egg-eating phase in her early laying days and recently returned to that destructive behaviour. Most of the time she was a poor layer, as well as a neurotic layer. Every time she started laying again after a break or a return from chicken hospital, she got really weird about the coop and made a big fuss, trying to lay in the woodshed or even in the run until I shut her in the coop to lay. If Frodo was broody that freaked her out even more. I blame her for at least some of the fluffing around that has occurred at laying time, as Lydia used to lay very sensibly in her own nestbox until Jane started making a big hoo-ha: “I cannot lay in the coop because another hen is IN THERE!” Jane was not like her namesake.

I often caught myself trying to reason with getting rid of Jane. Poor Jane. She just wasn’t worth her weight in food and medical costs. She was making up numbers, ensuring that Mr Bingley had enough girls to keep him occupied when my flock was in danger of extinction and I was reluctant to bring in new stock during the Marek’s learning curve. The final nails in the coffin for Jane were the resurgence of egg eating and the resurgence of bumblefoot. Jane’s feet struggled to heal from bumblefoot despite having the least case of it of my three hens that were affected. Her feet had trouble toughening up and what I thought was a pressure sore, like Lydia had, turned out to be, or turned into, a bumblefoot lesion. That really did my head in. With Lydia turned to the dark side of egg eating too, I would not keep two egg eaters to deal with in my small flock and neither would I spend any more money on ointment and dressings for Jane’s unhealthy feet. Lizzie had a resurgence in bumblefoot with the rough, brown skin stage, which she probably got from Jane when Jane was running around without dressings in an attempt to toughen up her feet. Lizzie’s feet are responding well, though. It’s not that I can’t deal with bumblefoot​, but I am no longer going to spend large amounts of time and money trying to fix a chicken that isn’t a valuable asset to my flock.

And so, Jane is gone. Some might call it harsh, some might call it sensible, but it was a huge call for me to make. What I have been feeling since then is mostly relief, I think relief that a big chunk of my chicken ‘workload’ has gone. It is a vastly different feeling to when I said goodbye to Legolas. Legolas was a useful, until that point healthy, very friendly, calm hen, who I was so fond of. I’m taking this feeling of relief as as a sign of making the right decision. Jane didn’t give me a farewell present, she ate her egg on her final day. A nice consolation is that the flock is actually working a lot better without Jane. She was ranked lowest of the older girls and now the older girls and younger girls are more cohesive. (Except Georgiana, who has been exiled to hang out with the youngies until she is mature enough to capture Mr Bingley’s attention.) Everything is calmer and the laying dramas have toned down. Mary has not turned into the new neurotic Jane that I was worried she might after her first few egg-laying days. Mr Bingley has reigned her in well and she is becoming sensible. Mr Bingley is doing a lot better too and is growing his lovely feathers back. 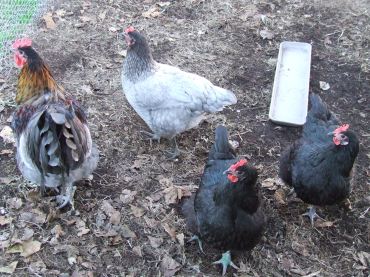 Lizzie (bottom) was probably missing her sister Lydia (right) a lot too. Some chickens roll with the punches and some feel things deeply.

What do you mean there are two black chickens? There’s only one and a shadow…

Now I have more decisions to make with regard to additions to the flock. One of my reasons for hesitance in culling Jane was again the numbers game. If PB is a boy, and now that I have formulated some plans I’m finally admitting that despite the fluff and the small comb, he is allowed to be a boy, I will need more girls to keep the two roosters occupied. The ideal ratio for a large breed rooster is 1:5-8. I have six hens now. So, if I want to keep the flock together as a whole most of the time, I really need another four hens. I am at the least in need of a Jane B. 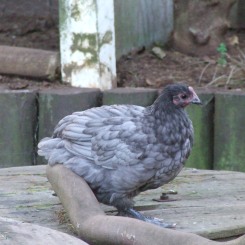 “You wanna piece of me?” says Mr Collins (right). I have gotten too used to Mr Bingley’s quick-maturing sons, like Mr Collins. 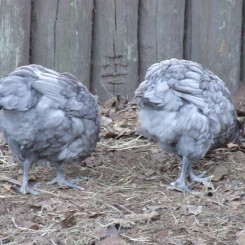 If PB is a boy and survives the Marek’s period, which is now upon us, I would like to breed him to Frodo in spring to hatch some purebreds. This would entail putting PB, Frodo and at least one other hen in a breeding pen for a little while. But I need to do something else before then to provide more females. My current plan is to let one of my hens go broody. If Lizzie goes reliably broody (she’s tested it out off and on) I will source some fertile eggs for her to hatch. If Frodo goes broody (haha as if there’s an ‘if’…) I could try sourcing some chicks to put under her at night for her to raise. It is too soon to put her through the whole, long broody process again. I can’t be too picky about eggs or chicks at this time of year, as there aren’t a lot available. I will settle for any purebreds that are big enough to run with my chickens and are from a good source. Once I have hatched and raised some more Australorp females I can sell the excess females. The other option is to just hatch some more of my own eggs. I’m just wary about getting attached to them and having too many close family members!

With fake eggs sitting in the nestboxes to help deal with the egg eating, broodiness is proving to be an interesting adventure. Lizzie sat on her egg broodily for a long time one morning. This morning Kitty also sat on her egg broodily and tried to peck me when I touched her. I hadn’t actually thought of Kitty as a broody option because she hasn’t been laying long. She would probably make an excellent mother as she is my calmest, least hand-shy hen, but she does like to talk about it. She is just lovely. In the nestbox beside Kitty, sat Frodo. Frodo full-on broody screeched at me when I touched her tail. But they were both out later on so no-one has committed yet…