We had a little bit of rain one day, which we celebrated greatly, although it didn’t make much of a difference to our parched ground. While the cool, soft rain fell The Little Fulla and I sat at the table on the deck cutting a plastic container into a scoop. I’d been saving some plastic containers to make scoops out of for a while. One day I discovered I had three of these 5kg dishwashing powder containers sitting around so I figured I better get onto it. It is a great way to get a free scoop. We are using two for the chicken food, one for layer pellets and one for grower pellets. The other one is in my potting shed to be used for scooping growing media.

Draw your cutting line, pierce with scissors and cut carefully, trying not to leave sharp edges.

A scoop is born.

We had an interesting morning. The Little Fulla watched the whole process of a chicken being butchered for the first time. He has seen parts of the process in videos and I have talked to him about it. I explained what I was doing and that this is where meat comes from and I kept reminding him that he didn’t have to watch if he didn’t want to. He laughed when dead Betty’s legs thrashed around due to muscle spasms. He was fine. He did say that he was sad though, and I said I was sad too. Betty was a lovely hen, so easygoing and always coming up to us. She was the opposite of flighty. So why did she have to die?

We have a lot of young chickens coming along and being on a small country property we can only fit so many chickens in. I am trying to keep the best of my purebreds so I can keep improving on what I’ve got. Betty wasn’t the greatest layer and she was also disappearing some of her eggs. Not every time, just sometimes her nesting and egg song was met with nothing in the nestbox. I overlooked it while most of the hens were busy being broody or ill and because she was moulting, but with everyone coming back to the flock and younger chickens hanging around, I am starting to make space and it was time to say goodbye to Betty. She had a super chilled out personality and we did like her a lot, but she was very light coloured and a bit fluffy at the back, so I wasn’t intending to use her for breeding in the long run anyway. She gave us two chicks. She was Darrington’s favourite hen. He has noticed her absence. I found him outside the coop a few times as if he were waiting for a hen to come out. But noone was inside. I actually feel sorry for him for once. I have tried to distract him with the addition of other chickens to the pen. Goodbye, Betty, thanks for being lovely.

Let’s focus on a few of the up-and-comers to make ourselves feel better.

And now we come to Paris. It’s never a dull moment with a Paris around. When I spotted a chicken over the fence in the paddock I was not expecting it to be Paris, broody mumma to five chicks and housed in the Corner Pen, the pen with the highest fences. It didn’t take me long to figure out how she’d escaped, as later that day I found her in the Orchard Pen with the rest of the flock, wandering around like a mad thing. She had flown over the fence or gate into the small adjacent Feijoa Pen, then over the next gate into the Orchard Pen, and evidently over the paddock fence as well the first time. I know because she escaped about six or seven times over two or three days before I almost had a fit.

I can understand a mother hen getting over a fence once, maybe even twice, but after that isn’t it obvious that YOUR BABIES CAN’T FOLLOW YOU?! Paris really wanted to be back with the flock, whether because they had more interesting food options, because she’s top hen, because she’s just Paris or what, I don’t know, but she was also stressing because she was away from the chicks. Paris flipped her lid. As soon as Betty was out of the way, plus Frodo, who had to go in the Broody Breaker, Paris and her chicks were released into the main flock. Darrington wasn’t impressed that Paris had brought babies with her. That was a little bit funny. At least he’s been kept busy managing everyone. 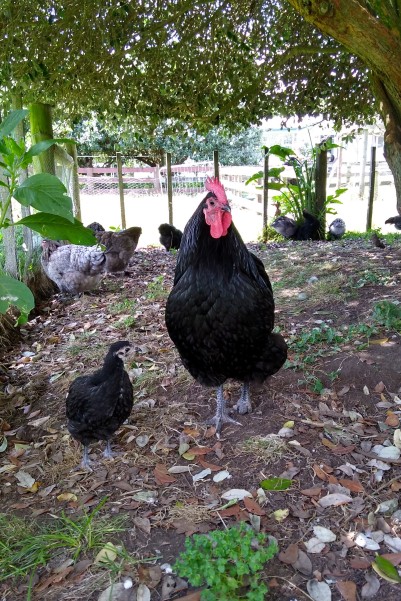 Darrington has a rare moment of being with a chick without chasing it away. This is Rory’s Betty chick, now 6 weeks old. It’s looking more girlish at the moment, so now I’m not so sure what it is. 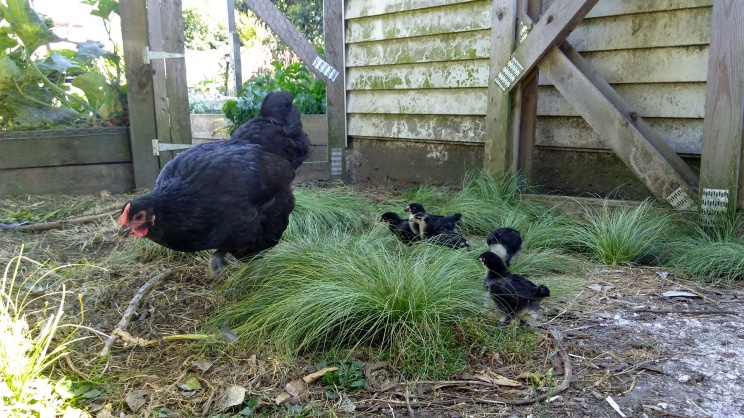 Paris has her chicks ranging all over the place, chasing off anyone who gets in her way.

The first night of Paris and her chicks being in the main coop with the flock I forgot to assist them at bedtime. When I went out there, Paris was in the Feijoa Pen, some of the chicks were cheeping along the gate trying to get in and the others were cheeping in the main coop. So, now you don’t want to be with the others, Paris? I opened the gate and Paris went into the coop and her chicks followed. I went in to check on them and there were only four chicks. The Betty one was missing. Oh no! Not the Betty chick!

Being the only purebred Australorp in the hatch, the Betty chick was the most valuable one, plus after saying goodbye to Betty it had risen to greater emotional importance in my mind. I couldn’t lose the most important chick again! I had grown quite fond of it too. I looked all around the coop with my phone torch. I looked under the other mother, Rory, in the hidey-hole corner with her three 6-week-old chicks, who were big enough not to need sitting on or beside, but she’s been very doting. I went out into the pen and looked all around in the dark, listening for chick noises. Of course I’d left fruit tree pruning piles in there, which would have been a good hiding spot, but I heard nothing. The other chickens could have ripped it apart without its mother around, I thought. Although that wasn’t highly likely, it could happen. Darrington isn’t great with chicks like Mr Bingley was. He usually chases them away instead of protecting them and helping look after them.

I went back to the coop. I looked under Paris again. Only four chicks. I moved a couple of chickens out of the way so I could properly move Rory to see all around her. There was the wee Betty chick, nestled up with the much bigger Rory chicks. What a relief! And what a smart little chick that one is. In the absence of its mother, instead of running around cheeping like a maniac it found the next best thing – another mother to hide under. I like that Betty chick even more now. And Rory. I’m surprised she let it under her with her chicks. I have to say, the balance of who I’m going to keep out of Rory or Paris is swinging back from Paris to Rory. It is a tricky decision. I think I need to make a pro-con list about it.