Here’s what the hens have been up to.

Paris has got chicks again. She went broody at just the right time to end up with some of the eggs from the incubator for the short lockdown stint. She has five little fluffballs, who all seem to be doing well. Four are her own and one is Betty’s. Unfortunately, I ended up with no Annie babies. One of the eggs got broken under Paris and the other two did not hatch. It’s starting to feel like I’m flogging a dead horse trying to get Annie chicks. Paris is proving her worth as a good broody again. Except the part about where she tries to attack me if I catch one of her chicks.

Another hen also went broody at the same time as Paris. Actually two did. Blaze and Pickle. Pickle, however, had bumblefoot so she has been recovering from that in chicken hospital. It was not fun trying to treat her in a broody state. There was a lot of struggling and pecking. The whole treatment thing has got her out of broodiness though. Now, Blaze has been a bit of a crazy broody. I had to leave her broody because my other hospital cage was taken up by Annie, who turned up with sour crop. Yes, things got a bit extra nuts. I need another cage. Annie is now back with the others but not back to laying yet.

Back to Blaze. I thought I might as well give Blaze two Annie eggs I had saved, plus two Frodo eggs. One Annie egg got broken in a nestbox kerfuffle with Paris, before Paris moved into the Corner Coop by herself, and the other one was a dud at Day 7 candling. I didn’t think any of Blaze’s eggs would be a-go since they got egg contents on them and Blaze has been a bit nutty. One morning she sat broodily outside the coop for a while instead of going back into the nestbox and one evening I found her sitting in a different nestbox on NO EGGS. She doesn’t sit as tight as I am accustomed to and she takes multiple breaks through the day, almost seeming to forget to go back to the eggs sometimes. I didn’t trust her broody abilities much, but the two Frodo eggs were, amazingly, growing chicks.

I put more eggs under Blaze. Why? Because I treated the chickens for worms and we couldn’t eat their eggs for 10 days, so I figured I might as well put some Frodo and Betty eggs under her to incubate rather than having them go in the rubbish. I have cottoned onto doing tag-team hatching with the incubator and the broody hens. If they all went to custard with Blaze, it wouldn’t matter much. If the first ones hatched, the rest could finish up in the incubator. Or with another broody. This heat is driving everyone insane.

On the weekend things got more crazy. I had just put Pickle into the big cage after Annie moved out and it was all clean, dry and re-filled. I saw Blaze was out on her evening break so I went to candle the eggs, with one week to go for the first two Frodo eggs. I found that several eggs had been broken in the nestbox. Dargh! I cleaned them up as best I could and candled them. There was only one of the first Frodo ones left. Of the six remaining second batch ones, one Betty one was a dud and the other looked a bit dubious, but the Frodo ones had signs of growing. This is why I don’t like having hatching eggs in the main coop. There’s too much potential for things to go wrong.

Well, poor Pickle had to go back to the smaller cage so I could move Blaze and her eggs into the big cage. I got Pickle out of the cage a little too quickly after she’d just had a big drink of water and she spewed it out down my leg. Oh, fantastic!

Overnight, Blaze sat on the eggs but in the morning I was unimpressed to find her off the nest, eggs cold and poop in the nestbox. All day she refused to sit on the eggs again and kept standing around. She seemed to be pulling herself out of broodiness. Crazy Blaze! I had to throw all the eggs out. At least they weren’t super important and I don’t really need any more babies at the moment. But I am annoyed at Blaze. She’s just too unstable to be a mother hen. She is the sister of Darrington, that’s all I can say.

The younger members of the flock are doing well. There are four lots of youngies now with the following age gaps between them:

The two older pullets, Tiggywinkle and Jemima are now 16 weeks old. It will be at least another month before they start laying.

Then we have the five Team Frodo & Paris babies, who are 9 weeks old. This includes the only offspring of Annie, the black boy. He has officially outed himself as a boy by crowing. He is extremely confident and is sometimes in the inner circle with Darrington and the hens. He comes up to me eagerly for food and when I hold him down on the ground he sits there until I walk away. This is exactly what I look for in a young cockerel. Darrington has never, ever sat still when I hold him down. I’m glad this boy is friendly and hope his confidence won’t go the wrong way. I have called him Andrew, since he is the son of Annie.

The blue Frodo boy has outed himself as well. He is a good-looking cockerel. I’m waiting to see if any red comes through in him or his sister. I hope it doesn’t. He is a really decent chap too, just more shy. I have called him Thomas and his blue sister Tabitha. Then we have the two Dorking girls, Moppet and Mittens. Mittens is the one formerly known as Paddlefoot, who had to have the special cardboard shoes to correct her curled toes when she was a chick. It seemed a fitting name. 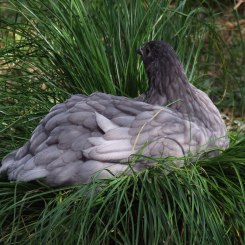 Andrew and Moppet are good buddies.

Moppet. The Dorkings are longer and lower than what I’m used to looking at. It’s nice having another breed.

Then there are the Rory babies, who are 4 weeks old: her two crossbred ones and the Betty one, which is nervous and skittish and I’m betting it’s a boy. It reminds me of Darrington, its father. If it is a boy, there’s only one place it’s headed.

Rory is slowly distancing herself from her chicks. 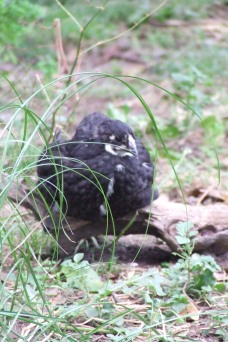 A Rory chick having an afternoon snooze.

Last of all we have the Paris babies, now over a week old. They’re more friendly than Rory’s chicks at the moment as Paris is more keen to teach them to eat from my hand. Paris’ Betty chick isn’t nervous like the other one. Paris just gets overprotective when I try to hold them…

Paris teaches her babies the art of dustbathing.

The Betty chick is the one up high. It is easy to tell apart because it has lighter features. One of the crossbred chicks has a single comb so I will have to make sure I don’t get them confused as they get older. 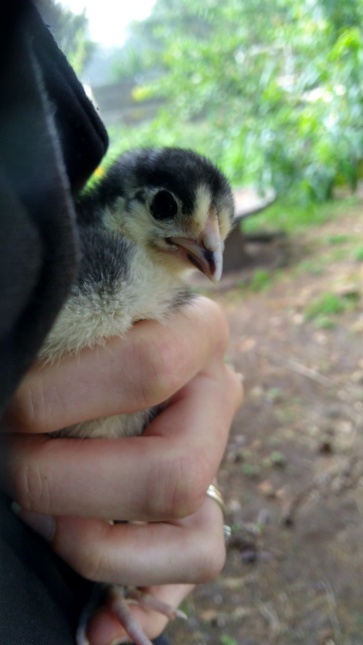