The last few weeks have seen all sorts of things going on for us. I did some work for the elections, which was busy but fun and financially helpful. We went to Auckland one day to visit our youngest nephew, The Little Gingernut. We also walked in Cornwall Park and enjoyed watching and feeding the lambs. The black lambs were particularly cute. 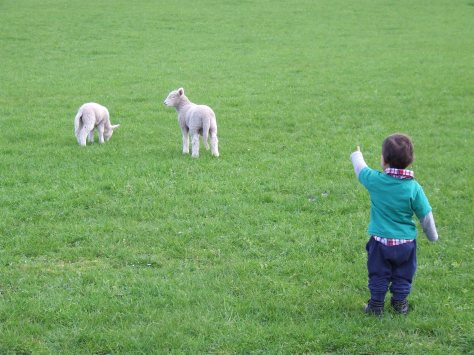 Is there anything cuter than a black lamb?

Back at The Homestead, the weather has continued to be all-over-the-place but it is warmer and we’ve had a couple of nice days and enough cloudy but non-rainy patches to get some things done. Spring has sprung and the plants are flushed with new growth. ‘Tis exciting!

I’m still in the process of getting the last of the old crops out of the vege garden and replenishing the beds with shoveled compost for the new season. The tomato, capsicum and chili seedlings are doing well, still loitering on the dining room table awaiting some less windy weather. The early potatoes are growing leaves, the onions are plodding along and the brassicas have been spurred into a growth spurt by the warmer weather and longer daylight hours. I have some catching up to do. I need to sow my cucumbers, pumpkins, beetroot, carrots, parsnips and various other crops. I need to plant my main crop potatoes but this can’t be done until I’ve topped up their bed with compost. I haven’t even had time to think any further about the next raised bed to be built. But I kind of need it!

The brassica bed. These photos were taken a week ago, so everything is even bigger now.

The onions and garlic. 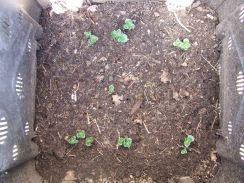 I have also started work on a new garden bed. Not because I’m a sucker for punishment, but because I need to do it in order to plant the apple tree, which is important since it’s in the food department. The sooner I get it in the sooner we get more fruit. This garden bed is beside the new washing line. I was supposed to re-pot and move all my potted plants from this corner first. I did enough of them to be able to move one of the two pallets they were sitting on, then I used some string to mark out the shape I wanted the garden bed to be. I was pondering what to use for the garden edging when I had a stroke of genius. I spied some of The Husband’s ‘firewood’ pile in the carport. Remember that load of tree wood that he picked up from the side of the road in his van? It turned out to be almost impossible to cut. He has been out there with all manner of tools (axe, sledgehammer, wedge, etc.) trying to split it. The wood is twisty and almost as hard as rock. I was already planning to confiscate some of the big round pieces to use as pavers down the side of the house. But now it was the long, more narrow logs that caught my attention. I confiscated them for my garden edging. But I was really doing The Husband a favour now, wasn’t I? Yes. Now, I have a garden bed edged with beautiful natural logs. The apple tree’s planting day is getting closer. 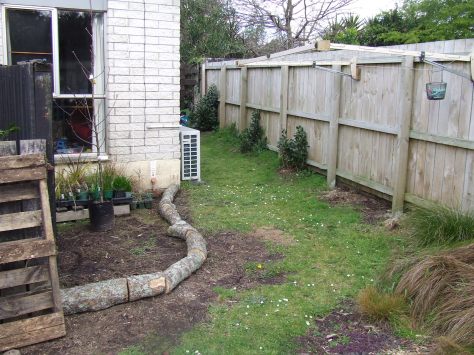 The new garden bed from the other side.

The view out the window is getting better. Except for the rain part. As soon as I finish re-potting and moving those plants I can fill up the rest of the bed and plant that apple tree.

The Husband has set the horrible ‘firewood’ aside. Beside the chicken coop to be precise. He has been working on The Pallet Pile and has dismantled and de-nailed all the chunky pallets that were sitting out the front. Hooray! Now they are sitting in front of the chicken pen waiting to be cut up for the fire. 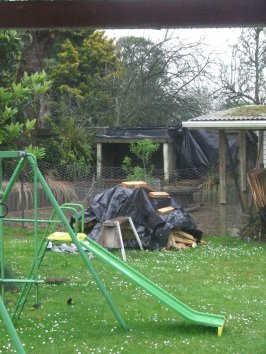 The Pallet Pile has moved and is on the way to becoming firewood.

The Husband has removed a lot of huge nails from the pallet wood.

The Case of The Egg Thief was a continuing saga, but is now officially closed. There will be a post on that very soon. Really! After being semi-broody for a while, Frodo finally committed to full broodiness after the longest wait ever and I have fertile Australorp eggs on the way for her to hatch. I didn’t blame her for not going broody when there was a new coop to get her head around as well as weird egg-thievery going on. Now Georgiana is following a similar semi-broody pattern. She looks and sounds broody when she comes out to eat in the morning and she sits in the bottom nestbox being broody for about half the day and acts more normal for the rest of the day. If she commits to broodiness I will give her a crack at hatching eggs. Might as well do two at once, right?

In preparation for Frodo’s next motherhood adventure I decided I would use the old coop as a broody house. I can shut her in there with food and water to keep her safe and in a more chick-friendly environment. The third-story nestbox in the big coop isn’t quite going to cut it for raising chicks and the far end of the coop where I wanted to make a broody area has been having water leakage issues. I dug a whole heap of dirt out of the square run area beyond the far end of the coop. There is concrete that comes out a bit from the woodshed and coop and the rest appears to be just dirt. I dug out a layer of dirt about 20-25cm high in a rectangle-ish shape from the far end of the coop towards the fence opposite, enough so that the old coop could be situated close to the new coop to try and block some of the weather effects and to get dirt away from the new coop. The chickens thought this digging was Christmas. I had to keep chasing them away and trying to block them from getting down there because they were just getting in the way. Dirt is so exciting!

I dug out five big wheelbarrow loads of dirt, then just started chucking it to the back of the run area, partly to fill in where the chickens had gouged out a lot of dirt and partly because I couldn’t be bothered doing any more wheelbarrowing. Some of the dirt went into the new garden bed after I had laid down some cardboard to help suppress the weeds. The rest went into the Plum Tree Garden, which can do with plenty of topping up to bring the ground level higher and further away from the water. Then I moved the coop and then I did a preventative spray for mites. I’m currently making a ramp, for the old ramp fell into disrepair. The eggs will be arriving any day. This is the first time I’ve had fertile eggs posted to me so I’m super excited and I hope they travel well! 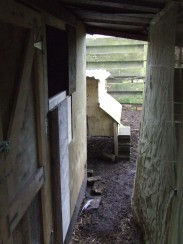 Before, there was a big layer of dirt…

And now there isn’t! At least not at this end.

The old coop had a central ramp that lifted up to close off the pophole. The ramp deteriorated and broke and I didn’t like how it worked anyway. 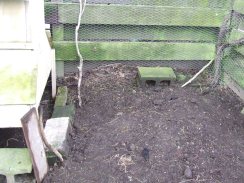 There’s a lot of dirt back here. It’s just as well I put concrete bits along the back of the broody coop, for the chickens and the rain have moved the dirt all over the place. I will dig more out when I can face the task of more digging.

5 thoughts on “The Spring Crazies”