Last time I talked about the pumpkins and squashes, which despite the powdery mildew and earlier-than-usual demise, still gave us decent crops. Except for the Pink Banana Jumbo squash, both plants of which grew like a stunted sloth and finally aborted their puny fruit. I blame the poor quality of the seeds. Plus the slugs and snails that destroyed the first, most vigorous seedling. However, The Little Sister did grow a respectable Pink Banana Jumbo from the seedling I gave her. I’m trying to be more impressed than jealous. 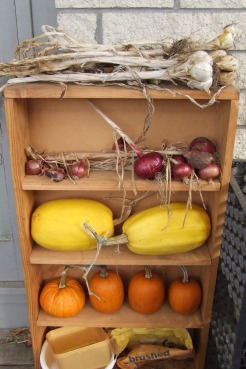 So much for emptying and moving this shelf…

We cooked our first ever spaghetti squash.

I may have baked it a little too long as it was a bit soft. Still good though.

Let’s take a look at how some of the other crops have been doing. Some have done well in the hot, dry summer and the hot start to autumn and some seemed to be playing a prearranged game of Let’s See Who Can Disappoint Twiglet The Most.

The honeydew melons were a terrible failure. Some died early on from the changeable and sometimes cold weather of December. Some died from over-watering, which is extremely ironic, but I didn’t realise how much moisture the Climbing Bed was holding since the peach tree started shading it more. The plants were very slow to grow. The one good plant had a little fruit on it but the powdery mildew and one cold morning were the death of it. Next time I try to grow some they need a really sunny spot with good drainage. And protection from cool mornings.

The cucumber plants are all dead now and were affected by powdery mildew as much as or more than the pumpkins. At least I got one batch of gherkins done. Most of the tomato plants have been pulled out too. They were a bit pounded by disease thanks to the heat and humidity on top of stingy watering. Our best performers have been Gardener’s Delight and our newest trial variety, Broad Ripple Yellow Currant. Both of them grow laterals very vigorously, even after the first laterals have been cut off. The renewing growth keeps them going for longer. The Black Krims did particularly poorly with the humidity. They have never grown as well for us here as they did in Christchurch, but we love the taste of them. The Husband requested we try a new black variety next year, so we will be trying out Black From Tula.

I’m a little ashamed to talk about our brassicas. We planted some cabbages, broccoli and cauliflower in summer and then I remembered why I don’t usually plant them in summer. It’s not because they can bolt, which has not yet been an issue with the varieties I chose, it’s because of the great white pestilence: the white cabbage butterflies. They have been everywhere and they have been laying eggs like there’s no tomorrow. Then the green caterpillars, which are deceptively soft and cute looking, voraciously eat EVERYTHING. Well, everything that’s a cabbage, broccoli, cauliflower or kale.

We had a bit of a crop protection fail there. We fed heaps of caterpillars to the chickens and the guys did some good butterfly catching, but we were a bit slow off the blocks and were no match for their reinforcements. The situation is getting better now as the cooler mornings and parasitic insects have made a dent in their numbers, but the butterflies are still out and tiny caterpillars are still hatching. Some of the brassicas are fighting through and forming heads and some are going to seed from the stress, which is actually good since I need to save seeds from some.

If all that wasn’t enough, the intensely smart white butterflies keep finding my new brassica seedlings in their seed trays, which have mostly resided under the table on the deck. To my great surprise and disgust, I even found a white butterfly that had flown through a house window, held open only a short way by the window stay, to find and lay eggs on my brassica seedlings on the windowsill inside. Now that’s just not fair! How do they do that?

My sunflowers were in on the game of disappointment. It’s not really their fault though; I once again tried to make them grow in the Maple Garden, slug and snail capital of the garden. No amount of pellets could protect them for long enough. There were two that survived that but they got taken out by a strong wind event. There is a silver lining in this story though, for a few sunflowers popped up in the chicken pen. I staked the biggest one and it survived nibbles from the chickens to bloom and shine like a great big Ha! to the snails. The flower head is drying off now and I’m hoping seeds are forthcoming.

Take that, slugs and snails! 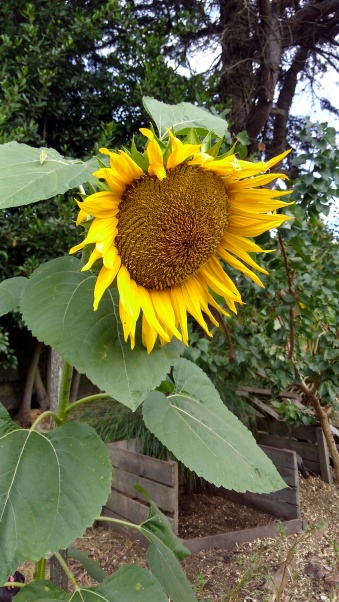 The carrots are doing well; those that survived the cat- or bird-digging incident. In the past I haven’t sowed enough carrots but this time I’ve been good about sowing multiple batches. There are lots of little carrots coming along and I have just sown more. The main problem with the carrots this season has been keeping up the water for germination and early growth. I found one absurdly fat green caterpillar chomping on some of my little carrot seedlings. He is gone now. Gone for a one-way visit to the chickens.

If you remember, the corn crop was planted a bit late. I’m really glad I sowed it anyway, as it has been one of the upsides of a long, hot, dry season. The plants are tall and the ears are developing nicely, from outside appearances at least. It is not ready yet, though.

Corn flowers, not to be confused with cornflowers. Or corn flour. Although some corn flour actually still comes from corn, just not the flowers of the corn.

Corn makes you wait for a long time.

The green Yard Long Runner beans haven’t given me a single bean yet, but the Yard Long Red Noodle beans have been very productive. The green ones have a habit of being really slow so I’m not going to grow them again. We might as well just grow more of the Red Noodle beans, as they do very well, they are pretty and we can always do with more nutrition from vegetables in the purple colour group. Both lots of beans had to be re-sown after the slug and snail battle, but the Red Noodles have grown strong in defiance of their enemies and I am very pleased with them. I have even remembered to leave several beans on the vines to dry out and collect seeds from. We sowed some late bush beans after the last potatoes came out. I don’t know if they’ll have enough time to mature but they’re growing anyway. 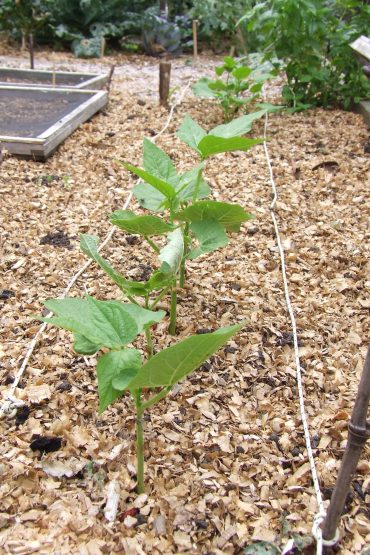 A late crop of bush beans.

The beetroot is growing well. This variety is Cylindra, which seems to do better here than Detroit Dark Red.

The red capsicums, Tollis Sweet Red and Alma Paprika are doing very well, as are the purple capsicums, which came from an orange-fruited parent. Hmm. The others got slowed down by the pumpkins. Ok, so maybe I planted them a little close to the pumpkins, but they were supposed to be Jack Be Little pumpkins, not vigorous crossbreds. The Tollis Sweet Red plants are very big and productive. They are a keeper.

The Vege Garden is currently a mixture of things that are still going strong, things that are declining, space from things that are gone and space where new seeds have been sown. The weather has cooled down enough to plant lettuces again and I have lots of other things to sow. 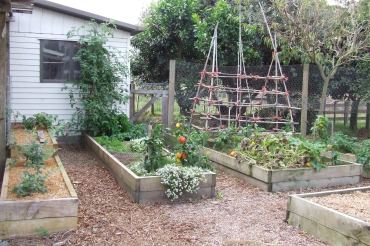 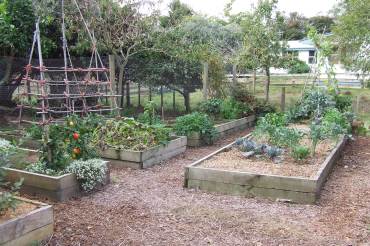 Preserving is still a major event at the homestead, with crops needing to be saved for use throughout the rest of the year when we can’t grow them. The Husband made two big batches of tomato soup and filled many small containers to keep in the freezer. We had to buy some tomatoes for this since we didn’t grow enough. We bought some locally-grown ones from the Morrinsville Market while we were there.

Chopping, bagging and freezing is my main method of preserving at the moment, as it is less time consuming than other things. Food crops processed in this way include tomatoes, capsicums (red and purple so far), beans, zucchini from a friend (grated), and pears. We are currently using chopped and frozen pears in our porridge in the mornings along with blueberries. The dehydrator has also been busy drying pear pieces, cayenne chillies and paprika capsicums. We will have plenty of paprika and cayenne pepper. We haven’t even finished last year’s ones yet!

I made another batch of plum butter, which is becoming a staple in the household already, mostly as a sandwich spread. This time I used one of the bags of frozen whole plums, which meant I had to get the stones out after the flesh had cooked down a bit. I think that was less time-consuming than cutting out the stones at the start, but the plum butter did take a bit longer to cook because of the extra moisture. It is good to know that this works and that there will always be a purpose for whole plums that get stuffed in the freezer during the speedy harvest season.

The Great Pumpkin Carnival is almost upon us so there’s a lot of pumpkin business to attend to now. See you on the other side!