The Dorking hens, Moppet and Mittens have left the homestead. I had been thinking about what to do with them since I couldn’t keep them with the main Australorp flock all the time, due to over-attention from the big roosters. We are limited with space and it wasn’t practical to keep them in their own small pen for large amounts of time, especially when it’s often needed for chicks or as a breeding pen. Upon much reflection, I decided that I needed to offload the Dorkings and all the crossbreds. This meant shelving the Dual Purpose Meatbird Side Project. I need to cut back on things and slow down, and with increasing numbers of Australorps, there are plenty of young cockerels to butcher anyway. But it was a hard decision, especially when it came to the Dorkings.

The Dorking girls have been such funny and pretty characters to have around. I kept trying to think of reasons and ways to keep them, but I knew if I did I would just end up breeding from them and making more work for myself. I was very tempted to keep one of their crossbred sons as well. The non-super-hormonally charged one. The Dorkings have found a good home, along with their two crossbred daughters, and will be joining some of Paris’ earlier crossbred daughters. I know they will have good lives and lots of love there and Moppet and Mittens get to stay together and continue their sweet friendship.

Now Paris is the last crossbred I have amidst my Australorps. Who would have thought I’d pass on the Dorkings before Paris? She is such a good layer though and isn’t as bossy as she used to be. When I get enough younger girls at egg-producing age, I suppose it will be time for Paris to go too. Ribby, Frodo’s blue daughter, has just started laying, which is great timing. It will be a few months before any of the young black pullets start laying.

I’ve butchered some of the young cockerels, including both the Dorking cross boys, and Timmy Tiptoes (who I got to see was quite crooked in the back, so I made the right decision there), so I have slashed the chicken numbers down quite a bit now. You do get to see a clearer picture of what’s going on inside your birds when you butcher them. The hormonally-charged Dorking cross cockerel had surprisingly large reproductive parts for his tender age of 11 weeks. I’m glad I didn’t keep him around any longer as he could have screwed up my hatching plans!

The feather babies are growing their little feathers, funnily enough, and getting more energetic by the day. They are now in the big cage in the garage, where the heat plate can still be plugged in. 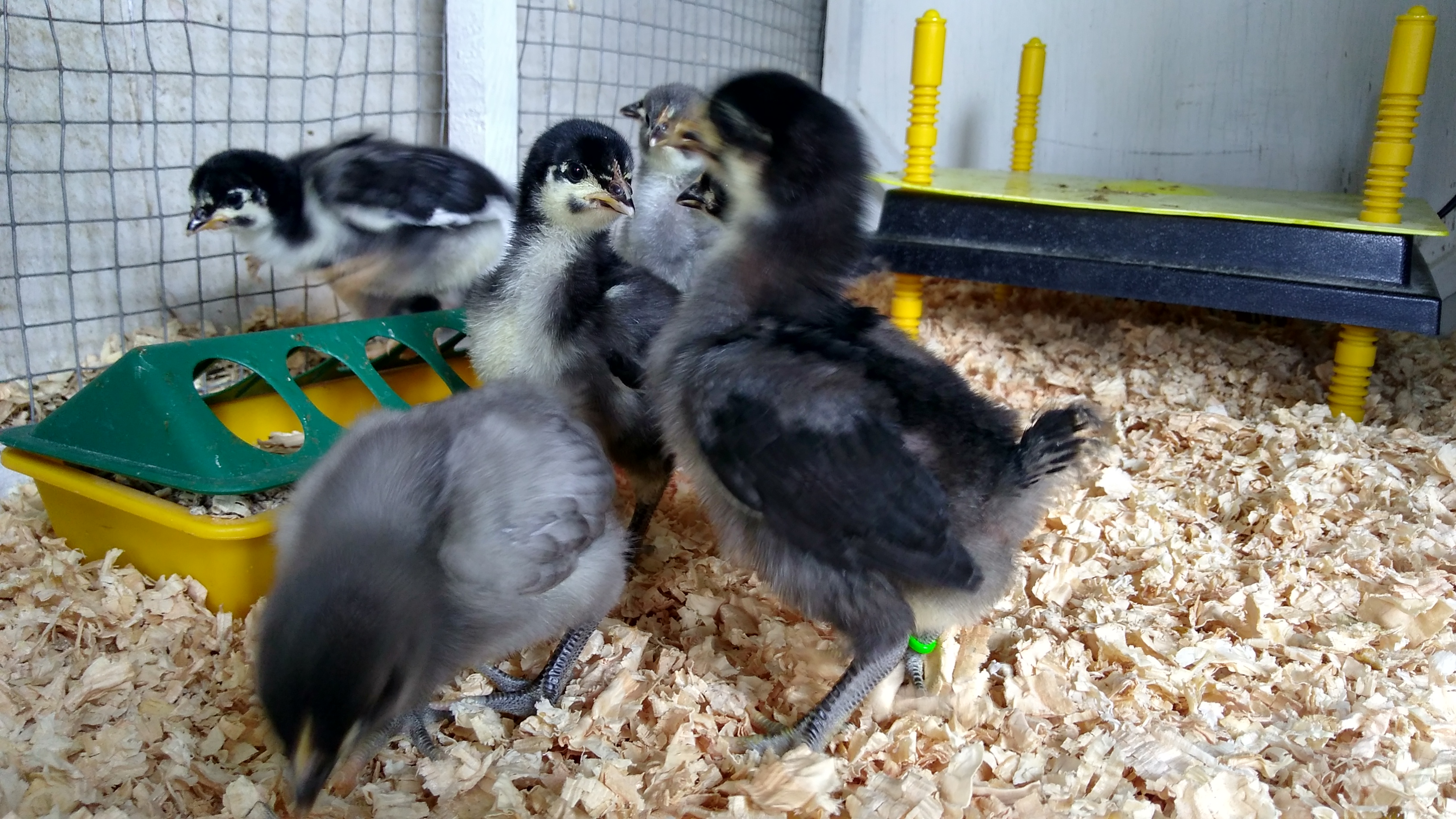 In the Veggie Garden, spring planting has slowly gotten under way as the weather has started to behave itself.

The Husband helped me to put up mesh panels on stakes; the new method I’m trying out for tomatoes this year. I liked the look of the bamboo tee-pees but they were time-consuming to assemble and dismantle. Also, the bamboo poles were deteriorating after about four years of use, which is longer than I expected them to last for. We have a few different sizes of wire mesh panels. I bought one with 10x10cm squares for $50 from TradeMe. One with 15x15cm squares was already here, just lying around, and there are a few smaller panels with 20×20cm squares that The Husband picked up for free from a scrap pile. Ideally, I want some sections that are long enough to bend over in an arc from one side of a raised bed to the other, so I am looking into options for that. For now, we will see what works well.

I have planted 15 of the 20 planned tomato plants. I say planned, because I always manage to find places to stuff more tomato plants in other parts of the garden. I have also planted six Wee Bee Little pumpkins, two butternut squashes and two cucumbers, plus sowed some parsnip seeds. I am just doing a few things each day to slowly get myself back into it. 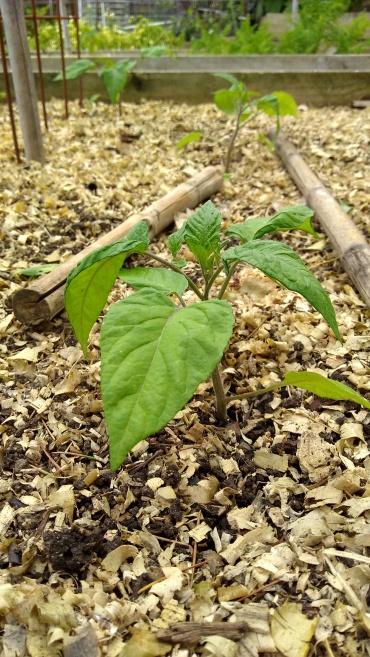 Tomato ‘Brandywine Pink’. The plants are easily distinguished from the other cultivars by their non-serrated leaves. 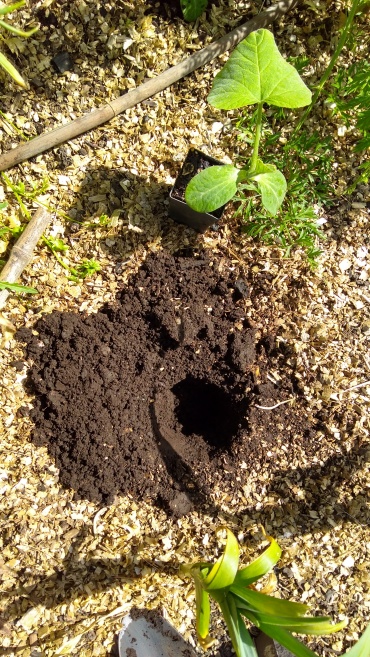 It’s hard to try and show you how good the soil is in the veggie beds. Organic matter + lots of worms and microorganisms + never walking on the soil + mulch = good soil.

The Little Fulla helped me dig holes for the first plants in the Front Plot: three giant pumpkins. It will be interesting to see how they go. The soil gets quite hard below the topsoil in some parts, from many years of compaction under the lawn I guess, and I will need to add a lot of organic matter on top to help build up some good soil.

The Husband felled a camellia tree smothered in ivy at my request, or The Little Fulla’s request, as he is always keen to see the chainsaw come out. The camellia was overcrowding the other trees, including the fig tree. I would much rather have more figs than a camellia tree with pink flowers. You’d think all the camellias must be gone by now at the rate that we seem to cut them down and have stumps and resprouting roots to deal with, but there are still three a little further down the fence: the white-flowered sasanqua and two different red-flowered camellias. And one red-flowered one I potted up beside the front door, saved from previous hacking and slashing in the Cedar Pen. It can’t cause any problems in a pot. Surely. I am thinking of something smaller to plant in the gap left by the camellia. In the mean time, The Husband needs strong encouragement to move the felled tree and ivy bits so I can plant some pumpkins in that corner of the Front Plot. And I need to carry on with the wire netting along the fence, now that the craziest patch of the wildest part of the garden has been cleared.

The slugs and snails are not to be underestimated at this time of year; they are ravenous beasts eager for fresh, juicy food after winter. I was grumbling a bit about the failure of the Pink Banana Jumbo squash, but in actual fact the slugs and snails are the first to blame, as they took out the first plant I planted last season. Young vegetable stems don’t stand a chance without protection. And so, the new vege plants must get circled with snail pellets. We squash a lot of slugs and snails but we can’t get them all. The garden is a battlefield. The slugs and snails have already started getting into the first ripening strawberries. No! The brassicas (broccoli, cauliflower, cabbages and kale) are ready to be planted but I dare not plant them until I have rigged up some protection from the crazy white butterflies. We know what happened to the brassicas last summer…