I had a weird situation earlier this week. I went to three garden centres and didn’t buy ANY plants. What’s up with that? It is most unnatural. It’s not that there weren’t any plants I wanted to buy, there were numerous plants I wanted to buy. There were even plants on my list that I eyed up, but didn’t buy. I came close to buying an almond tree at one garden centre, but they only had two left, one specimen had a weird wonky branch structure and the other had a split down its trunk. When you’re paying so much for a fruit tree (and waiting so long for it to produce a good crop) it is important to pick a healthy, well-formed specimen. I also turned up my nose at the strawberry ‘Temptation’ plants that I have been wanting for ages. It was like the money-saving instinct kicked in and I just said, “No” to myself and walked out the door. Three times in two days. Weird.

I was feeling pleased with myself but also unsettled, because I did still really want an almond tree. Every time I buy almonds The Husband pilfers them. I take almonds out to make something and The Husband pilfers them. Pilfer, pilfer, pilfer. He’s just in love with almonds. Add that to my taste for homemade almond milk and I needed to hurry up and get an almond tree for the future. And my sanity.

The next day, I tried another garden centre. I was about to leave when I spied the bare-root fruit tree section. I sidled over. Then, joy of joys I saw them – ‘Garden Prince’ dwarf almond trees! This is the cultivar I have been wanting and at $30, it was the cheapest I had seen them. Garden Prince is supposed to be a great small almond tree that can be grown in a planter and is self-fertile. The trees were nice and healthy-looking, and the one I picked has an excellent structure for a young tree, with four evenly-spaced main branches. Then I was feeling really pleased with myself. Next I went to Bunnings. Low and behold, they had strawberry ‘Temptation’ for cheaper than the other garden centres. Finally! I bought a punnet of four for $6.87. I must have looked like the Cheshire Cat by then. I now have three strawberry cultivars, which will enable me to compare and contrast during Summer. Mmm, tasty research.

When I got home, I heeled the almond tree into a garden bed along with a stake to help prevent wind damage. It will be quite happy there until I can buy a planter tub in the next few days. When The Husband came home, I told him I had bought an almond tree. His first comment was, “When will it have nuts?” Put your paws down honey! He may have to wait a few years for that. But at least I’ve done something about it now! Maybe I should get another one… In the mean time, it looks like the nut pilfering is set to continue. Oh, nuts!

In the vege garden, the garlic has come up, albeit a few rebellious cloves. I was curious, so I had a peek at the rebels. I may not have planted them quite deep enough, so I have tempted fate and lowered them a little. I don’t know if they will grow now anyway but we shall see. The weeds have also come back with a vengeance, but I am getting them out while they’re young and before they set seed. I think I’m starting to make a dent in the weed armies. 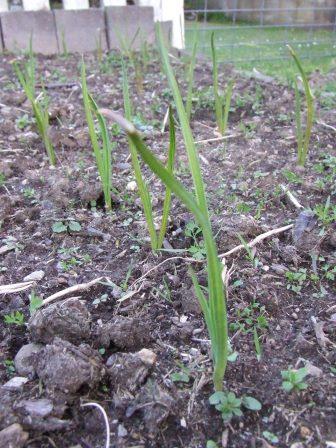 I have planted some lettuces and made a wee concrete discovery. There is a wider concrete edging around the vege garden that I did not know about! This is similar to my discovery of buried concrete edging in the front garden. The lawn,weeds and soil must have gradually taken over the edging and now I have the fun task of reclaiming the concrete. But maybe another day.

The rhubarb is still making a great spectacle of itself. It is winter. But I don’t know if the rhubarb realises that. It has only been in the ground for 5 months and continues to grow despite the frosts. You’re not supposed to harvest it in the first year to allow it to establish. But look at the jolly thing! Goodness knows what it’s going to do in summer. I can almost smell the rhubarb pies coming. Soon, soon.